Welcome back everybody! 2012 is upon us and the second half of the season kicks off this weekend – indeed a mouthwatering belter between the Mens 6ths and 7ths should prove to be a definate highlight. West Thornton, Pembroke Wanderers Club President looks ahead to the new season:

“Welcome back for the second half of the hockey season after what I hope was a good Christmas break for you all.
Whilst the main focus in Irish hockey is the upcoming Mens and Womens Olympic qualification tournaments in Dublin and Belgium respectively, our eyes remain on the progress of Pembroke’s teams for the remainder of the season, be they in the senior or junior sections of the Club.

Success can be measured in a number of ways but it remains important for Pembroke Wanderers to win trophies at all levels and to be fully competitive now and in the future in order to do so. With this in mind we continue to pursue the development of our young players in both sections whilst battling for honours, particularly in the IHL and EHL qualification areas, right across the teams.

A lot of hard work goes into fielding the various teams – after all this is what Pembroke is all about – and continuing this effort, even enhancing it where possible, is in the hands of all of us as Members and supporters. Pembroke Wanderers is a great Club – lets make it greater!
Happy New Year”. 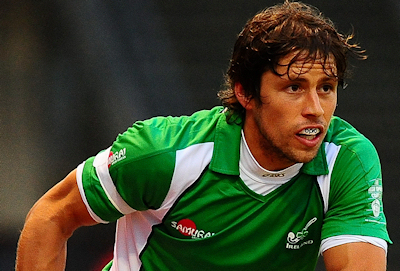 Details of the Men’s FIH Olympic Qualifier in Dublin this March have been released – and tickets are now on sale – call the ticket hotline 01-7163262 to order and for package details. The Tournament runs from March 10th to 18th in UCD – Ireland will face Russia, Ukraine, Korea, Chile and Malaysia.

Korea will be the team to beat, entering the tournament as the sixth-ranked team in the FIH World Ranking. The Ladies will travel to Antwerp, Belgium for their Olympic Qualifier – their assignment is even tougher than the Mens, they will face France, Spain, Russia, Mexico and hosts Belgium. Details here »

The prize for both couldn’t be greater – the winners of each of the Olympic Qualification Tournaments will earn a place at the London 2012 Games.
For the Men, hosting of this prestigious tournament in Dublin, and home advantage gives the Irish lads a major boost ahead of their preparations. With national team coach Paul Revington recently winning an FIH All Star coaching award, hopes are high that it will be a monumental year for Irish hockey and sport.