7ths make point out in Glenanne 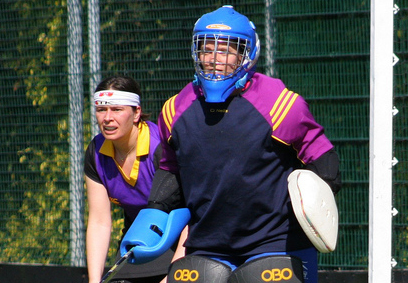 A very wet Sunday afternoon in Tallaght greeted the Ladies 7ths. Our opposition a tough Glenanne side who are currently sharing the top of the league. We started off strong playing mostly in Glennane territory and had a few chances in their circle. Glennane came back strong and even though there was a Tallaght foot in the mix, they were awarded the first goal. 1-0. Heads up Pembroke.

Just before half time, Sarah Large swept the ball into the back of the Glennane net. All square 1-1.

The second half was a challenge,  Sinead Gilfoyle played a blinder in goals. She put her body on the line more than once to keep us in the game. Caoimhe Cruise made a crucial challenge on the line to stop an almost guaranteed second Glennane goal. Her green card later in the game for not giving five yards was misunderstood as a red and off she went. We played with ten until Caoimhe realised she was back in the game.

Ash Schutte kept the Glennane backs busy with plenty of challenges. Great to have Eva Morris back in the midline after her  injury earlier in the season.
Unfortunately the game ended with a broken toe for Emma Keenaghan. Hopefully she won’t be out for long.

A point in Tallaght is a good result. Roll on next week. The 7ths on the up!