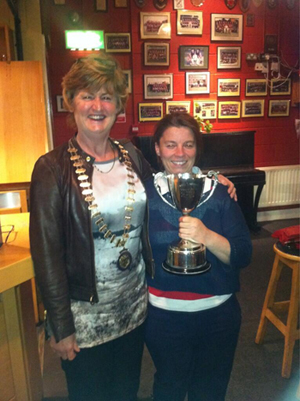 Update – Anna O’Neill has been announced as the new Lady Captain this week. Congratulations Anna!

Our outgoing Executive officers were also thanked and in particular West, Rob and Ava for their endless hours of work during the season which was much appreciated by all our members.

At the AGM the annual Linda Ryan Club Person Of The Year award was made. This is a prestigious award and is made to a Member or Members who have contributed to Pembroke Wanderers over the last season to an outstanding level. Whilst last season the award was made jointly, this year there has been one exceptional candidate and the selection of the recipient was therefore very straightforward! The Executive Committee was unanimous in its decision and the deserving recipient is Sinéad Gulifoyle.

Sinéad’s involvement in the running of the huge Junior Section of Pembroke is enormous, and has been for several years, and encompasses all aspects of management, selection, coaching, umpiring, and every other little detail in between. She helps keep the future of our great Club developing and competing at their own age levels, as well as preparing the players for life in the Adult teams. On top of this, Sinéad plays regularly for several teams in Pembroke, as well as promoting the Club through her Leinster and Ireland Master’s activities.

Many congratulations to Sinéad, who is the deserved winner of this award for 2012/13. [nggallery id=41]