Big weekend ahead for Men and Ladies

An action packed weekend ahead for both Men’s and Ladies gets underway at 12.45pm in Serpentine when the Ladies 1sts take on Old Alex in their final league game of the season. The girls will be gunning to end their season on a high and finish in 6th spot. Shona Doyle returns after a spell out with injury, however Anli Koetze will be missing having sadly had to return home to South Africa.

At 12.15 the Ladies 2nds wrap up their campaign down in Maynooth, taking on North Kildare 1sts at their new home ground. Old Alex 2nds already wrapped up the league title last week, but the girls will hope 3 points place them high enough to take second spot, with Railway and Loreto playing elsewhere. 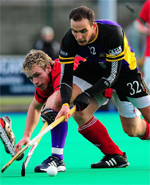 The Big game of the day in Serpentine takes place at 3pm – when the Men take on Corinthian in the Irish Hockey League – with 2 matches to go in Pool A the lads are well placed to earn a spot in the IHL Finals weekend on May 14th, but they will be firmly tested by a side which ran them close all season in the league, and indeed beat them both home and away in both encounters.

Elsewhere the Mens 3rds take on Railway away from home, having secured the league midweek thanks to a 2-0 win over YMCA at Claremont Rd.  A fantastic achievement for the lads. The Men’s 2nds still have all to play for with 3 games to go, currently in 2nd spot behind Corinthians 2nds they will be looking for a win and 3 points at home to YMCA @5pm.

The Ladies 6ths do battle up in Grange Road in their Leinster Cup Final at 2.30pm – and a good crowd is expected to cheer on the girls. Caroline Wharton’s charges have so far enjoyed a great season and have been training hard since their semi final win over Hermes and are fired up for the game this weekend. Best of Luck girls.

Full fixtures for the weekend here.