Busy season ahead for Mens 1sts 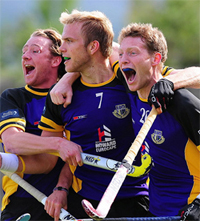 It’s shaping up to be another busy year ahead for the lads after probably their most successful season in the Club’s long history. On top of defending their Leinster League title, Pembroke will be looking to once again successfully defend their national title in the Irish Hockey League – the draw for which as paired them up with Banbridge (Ulster); Instonians (Ulster) Monkstown (Leinster); Cork Harlequins (Munster) and YMCA (Leinster, wildcard).

On top of a packed calendar on the domestic front, Pembroke have again qualified for the EHL – Europe’s premier club hockey competition. Last season Pembroke became Ireland’s most successful EHL representative, reaching the K016 in Rotterdam at Easter. The lads await this September’s EHL 1st round draw with plenty of confidence having done so well last time out. Look back on the amazing 2009/2010 season Pembroke enjoyed here >>