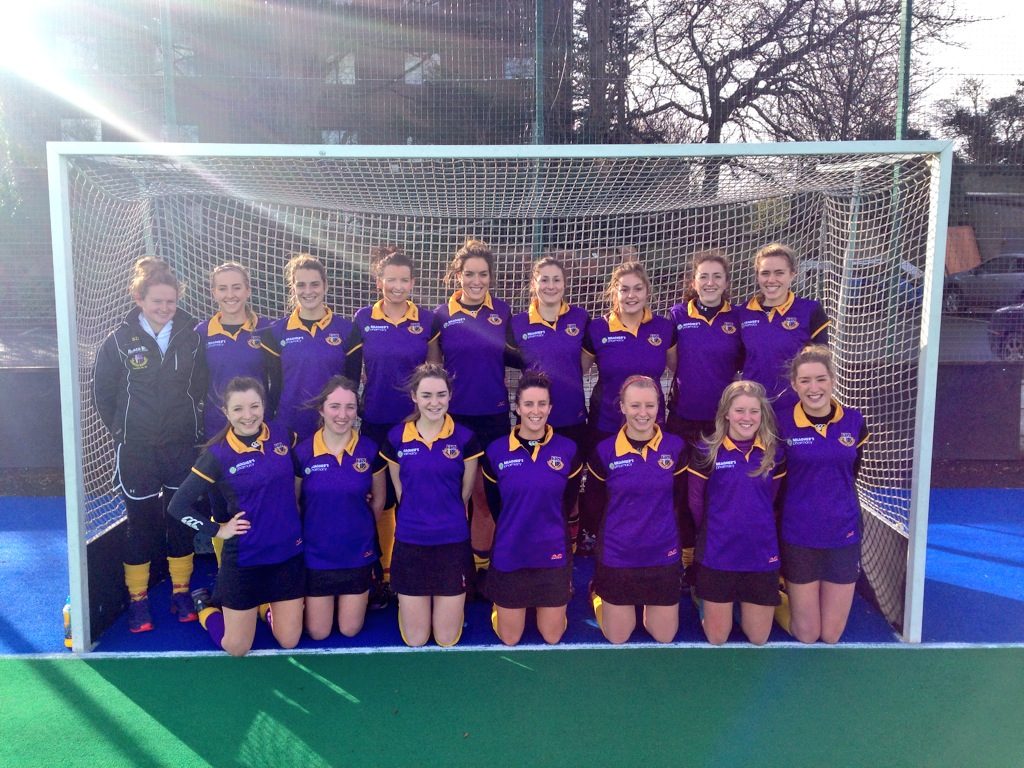 The Ladies 1sts are back in the big time after a thrilling Irish Senior Cup Quarter Final win over Loreto last weekend. Its 2007 since the Ladies last appeared in an Irish Senior Cup Final – where they were beaten 1-0 by Pegasus. This time they will need to overcome Lurgan in the semi finals if they are to progress to Finals Day, and another shot at winning the ‘big one’.

Our reporter witnessed the action at Serpentine Ave…

Pembroke Ladies welcomed Loreto again this weekend in the quarter final of the Irish Senior Cup, in a bid to avenge last weeks’s two-nil defeat against the same opposition. The threat of a rain-dominated game diminished by the start-time but high winds still swept the pitch on a typically murky January day. Pembroke, kitted out with new Meagher’s Pharmacy sponsored jerseys, were hoping that they might be a good luck omen, but it was Loreto who started strongly, winning a short corner within the first three minutes which resulted in the first score of the game off a slip left to Hannah Matthews. Pembroke were not prepared to allow a repeat of last week however, and a much improved showing from them lead to an even first-half, Kylie in particular going close with a deft back-post flick from a corner in an energetic first period.

Matthews doubled her account with a second goal from a corner five minutes after the break, the promising early play from Pembroke giving way to a tumultuous spell where Caroline suffered a nasty deflected ball to the face and Stella was called upon to make two composed saves.

With fifteen minutes remaining however, Pembroke got the break they had threatened in the first half, Rory and Clare Foley combining to create an opening for Sharon, her measured finish flying high into the Loreto net.

The goal renewed the sense of urgency in the game, the momentum now firmly with Pembroke, Loreto’s Sinead McGirr picking up a yellow within minutes. Pembroke were soon level, Claire Mul threading an exquisite ball into the D, touched by Alice onto Jilly, who with an alertness that was in stark contrast to her later that night, equalised with a clinical finish.

With both sides in search of a winner, Scotty picked up a yellow for Pembroke, both teams allocations down to ten as the full-time whistle approached and extra-time beckoned.

The attritional nature of the game seemed to take it out of both sides in additional time, both sides labouring to a stalemate until Loreto won a corner to win on the last play of extra time. Mul however charged down the effort, and the game was to go to strokes. Successful efforts from Scotty, Alice and Rory, (the latter’s trickling shot certainly not hindered by the helpful gusts of wind!) in addition to two saves from Stella, furthered Pembroke’s cause, with Niamh Small being required to score to keep her side in the shoot-out. Her effort went wide, allowing Pembroke to go ahead and book their place in the final four along with Lurgan, UCD and Railway Union. 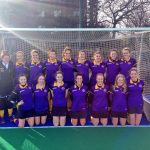 The Ladies 1sts with their new Meagher’s Pharmacy sponsored shirts 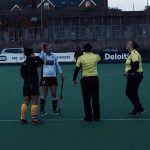 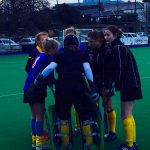 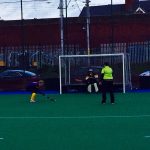 Pembroke will be pleased with a much improved performance from their loss to Loreto last week, learning from that defeat and stopping the away side breaking through the centre, whilst limiting their opponents to goals from corners while scoring two from open-play themselves. Claire Mul’s was the pick of many impressive Pembroke performances, and ably watched by her parents she confounded the fact that she never played A league in school!

Keith and Chris will also be pleased with the resoluteness shown by the team, equalising with two strikes in the final fifteen minutes to take the game to extra-time.