Pembroke Men were left desperately disappointed last night as Glenanne stole away from Serpentine with a narrow 1-0 win in this Irish Senior Cup Qtr Final matchup at the weekend. It was far from the usual classic tie between the old rivals, Glenanne without Johnny Goulding chose to sit back behind the ball, and allowed wave after wave of home attack to hit them. There defence stood tall though, and with Stephen Butler ready to pounce given the opportunity, it was no surprise when he slammed home from a corner, low and right past David Harte’s left hand. 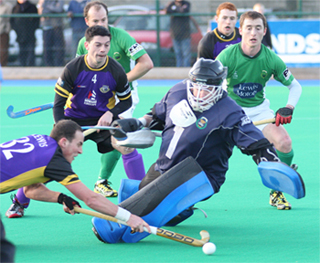 With only 15 mins left Pembroke through everything but the kitchen sink at the Glens, but Stephen Doran was on top form, and Pembroke never really looked like scoring again after blah went close at the far post from a great crossed ball from Justy.

So the men relinquish their 2 year hold on the Irish Senior Cup, but there is plenty to play for over the next few months domestically, and the EHL KO16 to come at Easter.