On Thursday night all seemed bleak when the Ladies 2nds lost a fourth starting XI player this season to ankle injury. Lorraine Horgan suffered ligament damage following an awkward fall at training, leaving just one of the regular midfielders available for the first match of 2012 v Genesis.

By Saturday morning coach Mick O’Connor’s head-cold had spread through the squad and the team-talk was barely audible over the din of nose blowing and sneezing! This was a must win game for the 2nds, as despite being at opposite ends of the table, they have struggled against Genesis, drawing the first league encounter and losing 2-0 in the JP Cup in December. However, this time it was personal, with the 2nds determined to take the 3 points and keep the pressure on at the top of the Division 2 table.

The Christmas break was very evident in the opening 20 minutes of the game, with both teams making a lot of unforced errors and failing to string together any decent passages of play. However the II’s eventually began to find their pre-Christmas form, and following some consistent pressure up front, won a couple of corners in quick succession. Louise Tolerton, continuing to smash her previous seasonal-best goal tally, coolly slotted home a ‘Lou Special’, complete with her trade-mark celebratory dance.
Shortly before half time Jane Brownlee scored her first goal for the 2nds. Linking up well with Anna O’Grady, Jane received the ball at the top of the circle, and showing beautiful composure, calmly chipped the on-rushing keeper to find the net. 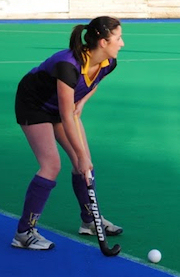 She shoots, she scores - Louise Tolerton broke the deadlock

In the second half the 2nds began to control the play – Anna O’Grady and Rachel McGrath (back after ankle injury) hunted down the back four relentlessly on the press, and the midfield line broke down play well to halt any Genesis comeback. The back line, with Lisa O’Rourke (heroically, given her circumstances) stepping in goals and Emma Sweeney slotting in at left back, showed why they have one of the best league defensive records, blocking everything that Genesis could throw at them, though Lisa was called on to pull off a great a save late on in the game to keep a clean sheet.

Goal number three came with less than 10 minutes to go, when Sorcha Conway drove across the circle from left to right before finding Joanna McDonnell patiently waiting at the back post to put the game to bed.

Win number 8 out of 10 for the 2nd’s this season, leave them 3 points clear at the top of the table.

Want to see your team-match report here? Email reports and photos to web@pembrokewanderers.ie