The biggest night in the Irish Hockey Calendar took place on Saturday night in the Burlington Hotel and Pembroke Wanderers were well represented as usual, having been nominated in 3 categories. In previous years Pembroke have won the Club of the Year and Coach of the Year title, this year we were also nominated for Youth Club of the year – just reward for our hardworking Colts and Fillies coaches and administrators, while Maurice Elliott was shortlisted for Player of the Year. 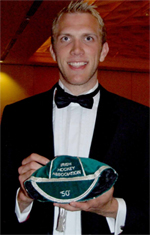 The Event was hosted by RTE’s Daragh Maloney with guest speaker Bernard Dunne. Minister for the Department of Tourism, Culture and Sport, Mary Hanafin was also in attendance.

Despite not picking up any of the main prizes, Pembroke did not come away empty handed – Norman and Agnes Lewis won a voucher for the IHA hockey camp – age group 9 – 17 !!! (Since donated to the Club – thanks both!) Chris Furlong was a bit luckier, picking up a meal for two at The Burlington while David Harte (pictured) was honoured with his 50th senior Irish Cap, well done David.

Full list of Winners are available on The Hook