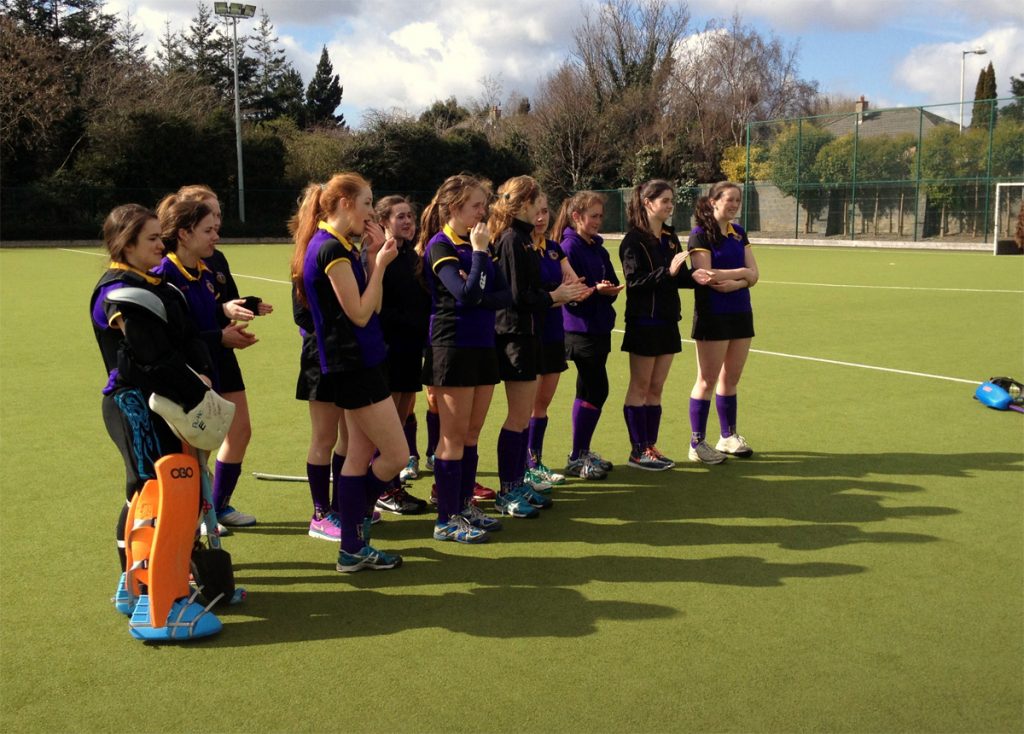 The Yellow team faced a difficult challenge against Avoca HC in the final yesterday, captained by Rebekah. The girls arrived eager to play, and showing determination and desire to win, but were unfortunate to walk away as runners-up. Avoca pressed hard from the start, and created some immense pressure for our defense. They pressed high, and ensured that few of our clearances could reach
the mid-fielders. Positioning was weak at times, with some of the forwards and mids hiding behind their markers and ensuring that Avoca won the ball more often than not. Pembroke struggled with the intensity of the match and the dpeed of the Avoca forwards.

Defenders, Alannah, Roisin, Rebekah, Aoibhinn and Niamh worked incredibly hard to keep Avoca out of the circle but the pressure was just too great. Avoca’s first goal came from a well-worked short-corner – the only shortie PW were to concede demonstrating the skill of the defenders. Pembroke had their chances however, with Susan, Ailbhe and Emma B. working hard in mid-field, and Emma S. showing determination up-front. The girls had several attempts at goal, but they were cleared by the Avoca sweeper. Despite going 1-0 down, Pembroke remained positive. Half-time provided an opportunity to address those problems and the second-half saw a definite improvement.

Unfortunately, Avoca showed no intention of reducing that pressure. Their second goal came from open play, as a slap-hit into the D was slotted home at the back-post. At 2-0 down, the Yellows faced an even greater challenge. Luckily, they remained resolute and continued to fight. Through some well-worked passing from Aoibhinn at left-back, the ball reached our attackers and the girls faced a 2-1 attack with the Avoca goalie. Their efforts were hampered by a weak pass however, and the attack came to nothing. The girls fought on though, and two minute later had a straight shot on goal which was to be saved by the Avoca came. In the dying minutes of the match, Avoca were given a stroke in what was a highly questionable umpiring decision.

Unfortunately, they scored and the match ended in a 3-0 loss. Man of the match goes to Roisin, for what was a very strong performance at centre back. Hard luck, girls! You should be proud of ourselves nonetheless.
Steph Courtney (Coach on the Day)