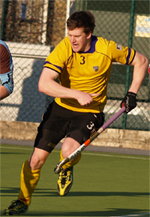 Congratulations to Pembroke’s Ronan Flannery who made his Irish senior debut over the weekend. Short report from the Irish Hockey Association website:
Ireland took on Canada in the first of a three match test series in the National Hockey Stadium, UCD. Canada took the lead in the 21st minute scored by Ian Smyth.

Ireland dominated the second half and equalised in the 52nd minute from a penalty stroke scored by John Jermyn. Canada took the lead for the second time in the match as Mathew Guest scored on the hooter to finish 1-2.
Well done Ronan, and best of luck this weekend in Bloemendaal.