A spectacular end with a silver goal in the last play of the first half of extra time means that the 1st year Orange team advances to the semi-final. This match appeared to be running away from the home team when Skerries’ got a goal in the first half, but Pembroke responded by dominating the rest of the match and getting a well-deserved equaliser.

Unfortunately despite the constant pressure exerted on the Skerries’ goal Pembroke were unable to get a winner and the match went to a nail-biting finale. Luckily perseverance paid off and Pembroke’s goal at the death capped a Pembroke Orange will face St. Brendan’s Phoenix Park on 2.3.14 – Home game TBC.
Máirtín Cronin (Stand In Coach for Sorcha Conway)

On yet another cold Sunday morning Pembroke’s Purple team arrived at Holy Child, Killiney to face Monkstown in the league semi-final. It was a tight first half but Pembroke scored 15 minutes in, through Sarah O’Dea and went into the halftime break 1-0 up.

Pembroke came into their own in the second half and got two quick goals scored by Sarah O’ Dea and Martha McCreedy. Not too long later Martha struck again with a fantastic solo effort – our fourth secured. Once Martha scored we sensed victory was close. Pembroke did it again with a fifth goal scored by Lucy O’ Sullivan which scrambled over the line, at first was called as a save but after a scream from Zack the goal was awarded. Monkstown kept pressing and scored a deserved goal in the last five minutes of the match.

It was a great performance from the whole Pembroke squad. We are now through to the final where we will meet Mount Anville on the 23rd March. Well done girls and a big thanks to Zack for all his work with us.
Reported by Sarah O’Dea

The Pembroke Pinks were excited and ready to play their semi-final against Weston as soon as they stepped on the pitch. Within the first minute the Pembroke Pinks took the lead with Maria Joy tapping in the first goal. After this the girls’ spirits were high and positive. The girls skilfully dodged around the defenders, scoring goals. Eleanor, Anna, Laura Noble, Juliette, Laura O’Donoghue and Sophie were very good in mid field passing the ball up to the forwards. Hannah, Emily, Andrea, were very good in the defensive line clearing all the balls Weston hit at them. And Maria and Molly were skilful in the forwards weaving past Weston’s defenders. By the end of the first half we were up four nil.

When the second half started the girls were confident as we were up four nil. Within the first few minutes the girls had scored two more goals! After this the girls were very good at keeping the ball in possession and were determined not to give the ball to Weston. The defence were very good at clearing the ball when the Weston team tried to score. The Weston team hit a good few shots near the goal but the defenders were determined not to let them score. Overall the girls played very well! Player of the match goes to Laura Noble for her amazing performance weaving through all the players in mid field. Well done Laura!
Reported by Emily McCarthy

A very strong Pembroke side took on Weston today at home in Pembroke. From the starting whistle Pembroke were on top, making all the 50-50 balls and the defence were on top form throwing in great tackles left, right and centre. Just inside the third minute Pembroke scored their first of many goals with a great passage of play from Isabel, Eleanor and Andrea in defence all the way up to Molly up front who got the final touch past the Weston goalie to make it 1-0. Not long after Pembroke scored two more goals in quick succession with wonderful accurate pushes into the goal from Sophie and Juliette. Just before the half time whistle blew, Laura made a fantastic run up the pitch, dribbling by 3 Weston players before sneaking it by the goalies pads to make it 4-0 at the half time break. More success came Pembroke’s way in the second half with three more fantastic goals from Laura, Maria and Molly. For the last 10 minutes Pembroke held possession for the most part and even had a few more chances at goal but they were saved by the Weston goalie, leaving the end score 7-0 to Pembroke. Pembroke will Meet St. Brendan’s in the League Final on 23rd March 14.
Hannah (Cover for Coach Steph, who had own game) 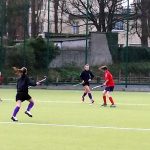 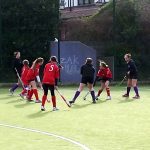 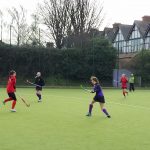 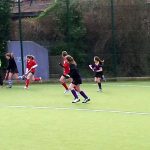 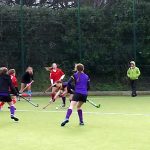