Girls rue injuries after narrowly missing out on Indoor Finals 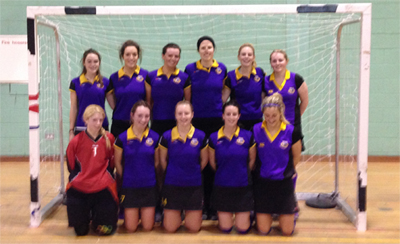 Any lingering post-Christmas toxins were swiftly expelled from our pores in Group 2 of the Women’s National Indoor Trophy which took place on the 5th and 6th of January. After figuring out the conundrum that GormansTOWN and GormansTON College were in fact the same place, the ladies car-pooled out to Co. Meath on a mild weekend that would have been ideal for an outdoor jaunt!

With guest players Kate McKenna (Railway) and Noelle Farrell (formerly of Pembroke, currently studying in the UK) joining us, we had plenty of fire-power in the squad and a bench deep enough to dive into. In the larger of the two qualifying groups of the weekend, it took some time to adjust to the indoor game…but resisting the urge to spin (Sharon!) and lift (Sorcha!) we came away with 2 wins, scoring 5 Pembroke goals in each, to see off Trinity and Clontarf for a successful Day 1. Luckily the 2 sin-binnings for the newly made-up and temporary rule only applying to Pembroke, in which substitutions were not allowed during play, and a saved penalty, did not affect the results. A humble apology followed after overnight consultation of the rule book…

Not even the (somewhat worrying) smell of natural gas in the hall was enough to mask the stench of Lisa’s gear on Day 2. An early start was a good one, with a 4-0 win against Avoca. Emma Keilthy scored the goal of the weekend, deflecting a long Rachel Scott ball into the net moments before getting ‘stuck’ to the floor and twisting her ankle (since there was nobody near her, Scotty’s magic towel was to blame), ruling her out for the rest of the tournament. Hermes however, with internationals Chloe Watkins and Anna O’Flanagan guesting from UCD, proved to be an immovable force, stunning the rest of the group with their slick stick skills and 1 touch passing to score a whopping 33 goals!

Whilst starting well against them, responding goal for goal for the first 3, a sense of déjà-vu crept in, as a melodious (how do you say?) ‘brain-fart’ cost Pembroke 5 goals in as many minutes, the game ending on a final score of 9-3. Captain Jilly took a combined hammering from Lisa and the Hermes keeper at either end to come off with a fat toe/arm/chest, the first of which eventually put an end to her day after being allowed 3 hours to swell up at the break.

A group excursion to the infamous Harvest Bar in Balbriggan was enough to waste a good portion of this break before returning to watch the Hermes v Alex game, Hermes once again victorious. This meant going in on level points and a superior goal difference, a minimum of a draw against Old Alex was needed to proceed to the play-offs next weekend. It was hard fought, but with seriously depleted numbers due to departures and injuries, there just wasn’t enough in the tank to achieve this, and unfortunately came off 3-2 the worse in the last game of the day.

Hopefully all was not lost and the flat-stick tackling and dragging skills will come to good use for the second half of the outdoor league!

Europe, looks like you will have to wait til 2015!

Boards, farewell, we will miss you!