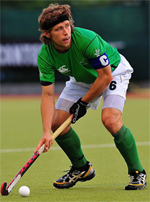 Pembroke’s Ronan Gormley lead the way as Ireland cruised to an emphatic Celtic Cup win in France over the weekend. Ronan notched up two goals along the way and earned his 100th senior Irish cap against the French, a win which secured the Cup for the Irish for the 3rd year running. Pembroke duo Alan Sothern and Alan Giles (scoring his first goal for Ireland) also contributed to the rout. Earlier wins against Wales and Scotland had put the Irish in the driving seat, Pembroke’s Conor Harte was also among the goal scorers as Ireland beat a tricky Scottish side 3-1 on Friday afternoon.

Ireland finished on 9 points  – with 3 wins from 3 and will now look forward with confidence to their upcoming series of games against the French at Cookstown this coming weekend.