Honours even in IHL opener 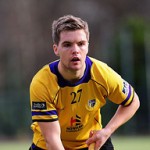 This is the first time in the current IHL format that Pembroke entertained their friends from C of I Cork.

Alan Sothern, Pembroke’s most threating forward had hit the bar in the 7th minute. This was shortly followed by two successive S/C’s both of which were saved. C I’s only corner of the match came after 10 minute of the Quarter and the combination of Hobbs, Sweetnam and Jermyn saw the ball whizz past Williamson for the opening goal of the game and C I’s first. There were flurry of attacking hockey from both sides but never enough time for the fast running forwards to get a touch although right at the end of the quarter Sothern got to the ball first and deflected it past Lynch but hit the post. The quarter finished 0-1 to CI.

Early in the 2nd Quarter Pritchard was disposed just inside the PW half and four CI players created a quick break and a 4 on 2 developed but Williamson advanced well to clear for a long corner. In the last 5 minutes of the Quarter Pembroke raised the tempo and brought hurried clearances from the CI defence and in particular Captain and CK, Billy Lynch and Philip Smith and veteran Nigel Buttimer. Jermyn, who endured time off the pitch for a green card, Hobbs and Smith caught the eye for CI and for Pembroke, Sothern Conlon, Flannery and Elliott. Earnest endeavour rather than high skill was on display with the ball frequently going out of play. The Half Time score was 0-1 to CI.

The 3rd Quarter commenced and almost immediately a yellow card to Shane O’Donnell for persistent fouling of the player in possession. Pembroke took the opportunity to press forward but only a snap shot from Sothern to show while CI were down to 10 men. In the 11th minute from a strong run by Hobbs who was fouled just inside the Pembroke half. The free was taken whilst the majority of players from both sides were wrong footed and the ball slipped through to Gary Wilkinson to beat the onrushing Williamson with a deft lift from just inside the circle, 0-2 to CI.

The two goal lead was short lived with a good goal from play from Elliott to bring Pembroke back to 1-2. In the 16th minute of the Quarter Wilson was Yellow Carded for a stick infringement and the Quarter ended with Pembroke maintaining the better the possession and also of play territorially although down 1-2. In effect the game only really came to life when Pembroke were 2 down. Up to that point there were very few chances or clear shots from play. Pritchard, Lewis and Brown drove forward for Pembroke but the tightly marked forwards could not get enough space.

No sooner had the 4th Quarter commenced than Smith’s pass to the right was too hard and the ball went out of play. Elliot was swiftly on to the push in and played it back to the penalty spot for Sothern finally to take possession and on the reverse crash the ball past Lynch and into the net for Pembroke’s equalising goal. In the 5th minute a quick attack brought a two on one led to Pembroke’s 3rd S/C and although well saved again by Lynch a further corner resulted. That too was cleared leaving Pembroke with a S/C count of none from 4 and CI 1 from 1. The remainder of the game saw Pembroke with more of the ball but only a share of the points.

Get more news and results from www.irishhockeyleague »
The next round of the IHL takes place on October 29th, the Men take on Three Rock Rovers in Grange Rd at 2pm.

Other news:
The Ladies 2nds went top of Div 2 beating last year’s winners Railway Unions, 2-0 at Pk Avenue – Lizzie de Araugo with the opener, new girl Anna O’Grady getting the the second (and her second of the season) after rounding the keeper to secure the points.

The Men’s 2nds had the weekend off with IHL, but remain top of the pile after 5 games. The Mens 4ths, 5ths and 6ths all won at the weekend.

On the Ladies side the 4ths, 5ths and 8ths all won – the 5ths 4-2 win away in Skerries a definate highlight with schoolgirl Tatianna Temperley grabbing at least two of the goals, while the 7ths kept the pressure on at the top of Div 9 following a draw with Genesis. Well Done all.