On a cloudy and cool afternoon in Dublin, almost warm by recent standards, this vital match for both teams in Pool A tipped off at 2-30pm.

Two points separated the hosts, Pembroke, in second place and Ards in fourth place with only one match remaining after this round.

Pembroke are having a mixed season in Leinster languishing in the bottom half of the League but they have advanced to the final of the Leinster Senior Cup on St. Patrick’s Day having beaten Hermes last week. Ards are currently second in Ulster to Armagh but have games in hand to the leaders. However they have come off a defeat last week to perennial champions, Peagsus. 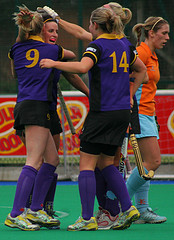 Jilly scores to level it 1-1

Ards won the toss and Pembroke tipped off. The first few minutes were spent with Ards attacking through Janice Vaughan and Eimear Horan. The sporadic attacks by Pembroke came too little as the final pass failed to be delivered accurately. A searching run after 15 minutes by Karen Hales led to a shot which was well saved by Claire Black and the rebound was put over the bar by Jill Collins. The Quarter ended 0-0.

The game came alive in the 23rd minute when a hard hit inside the 22 was deflected by Clara Chamberlayne for an own goal and a 1-0 lead to Ards. The lead was short-lived when in the 26th minute from a quick switch of play Jill Collins gave the ‘keeper no chance when she shot high into the top corner. This brought about a concentrated period of attacking play by Pembroke. There then followed a green card to Karen Hales and the mandatory two minutes in “the sin bin”. Ards earned their first P/C following this incident in the 31st Minute. This corner was switched and saved but a further corner ensued but the shot was too high and although ending in the net it was disallowed. Pembroke attacked quickly and earned their first P/C following a good run by Clara Chamberlayne. However the corner was saved but the rebound was hammered into the net by Sarah Clarke and the half ended with Pembroke leading 2-1.

The 3rd Quarter commenced with a swift attack by Ards and a deliberate block in the 22 led to a P/C This was saved by the Pembroke defence and Ards continued to enjoy most of the play but not having many shots. Pembroke’s Wendy Hobson earned a green card in the 41st minute but her team survived the temporary loss. In the 46th minute an excellent run by Jill Collins led to a further P/C for “feet” but the shot was well saved by Claire Black. Pembroke’s first yellow card arrived in the 46th minute. Captain, Rachel McKeon, getting tied up in the middle of the Pembroke half and an over physical challenge led to her “sin binning”. However the quarter finished with Pembroke attacking but a succession of P/C’s came to nothing and the score was 2-1, all scored by Pembroke. 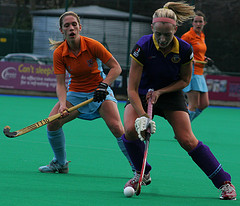 A final and robust quarter commenced with a challenge between the Ards Captain, Janice Vaughan and Karen Hales. The consequences were 5 and 10 minutes respectively in the “sin Bin”. A further misdemeanour in the 64th minute by Eimear Hogan who had earlier received a green card meant a “yellow” and 5 minute in the “bin”. These temporary dismissals led to a disjointed quarter with little shape and cohesion in play by either team.

Pembroke probably just deserved their win and moving up the Pool A table with 10 points. Ards, “on the road” earning a bonus point through losing by only one goal.

They were two evenly matched teams but the difference was due to the willing and self less running up front by Jill Collins and the composure in defence of Anil Kotze, Sarah Clarke and Clara Chamberlayne.