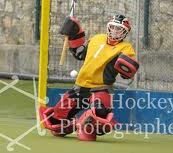 The men’s 1sts travelled north on Saturday looking to avenge April’s quarter final exit at the hands of Lisnagarvey. The 3-0 was one of the lower moments of last season and many of the squad were looking to set the record straight.

Lisnagarvey saw the better of the early chances with a penalty corner, as well as a quick counter attack chance falling their way. Thankfully Mark Ingram was once again in inspired form. Pembroke’s first big chance didn’t come until the 28th minute, by way of a penalty corner, when Alan Sothern was unlucky to see his low drag saved on the post. From the resulting corner, Garvey stole possession and broke into the Pembroke circle to force another penalty corner. Although Mark Ingram managed to get a stick on the shot, he was beaten by the power and Garvey went 1-0 up.

Mossie Elliott picked up a green card in seconds after play restarted, but the two minute breather proved to be just the tonic for him, as he was involved in the equaliser, immediately after he rejoined the game. His clever work along the baseline forced the ball inside for Al Sothern to smash home and continue his current scoring streak. The sides went in at half time level at 1-1.

The second half proved a tense affair with both sides having chances to settle the tie in their favour. Pembroke failed to find a a man in a scoring position when Mick O’Connor fizzed a cross between Elliott and Sothern. Al then had a short saved after good work by Geoff Garrett. Ill discipline crept into both sides with Adam Pritchard and Mossie both picking up yellows to match the away jerseys either side of a green card for Garvey. The numerical disadvantage allowed the home team to dominate and they squandered plenty of chances, with Mark Ingram proving a rock in goal and saving a number of penalty corners, including a spectacular effort low to his left with barely seconds on the clock.

Ten minutes of silver goal extra time failed to provide a winner and both teams had to prepare themselves for the psychological test of strokes.
Although Garvey took the early initiative and converted the first stroke, Pembroke weren’t behind for long, equalising immediately. After that, it was the Mark Ingram show as he saved two and watched a third come back off the post to send the lads into the quarter finals, where they will now face YMCA in Milltown this Saturday at 13.30h.

In other news, the 2nds enjoyed a rest day; while the 3rds took full advantage at having their full squad available to thrash Clontarf 6-1. The 4ths tie away to Three Rock was victim to the cold weather and poorly draining Grange Road back pitch, as their 10.45h match was scuppered by a frozen surface. The 5ths picked up a draw at home to St. Brendans and the 6ths were beaten away to Corinthians