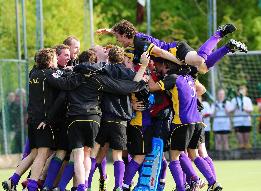 The IHL kicks off in earnest this weekend, catch Pembroke’s first Pool B game in Serpentine on Saturday as they take on Cork C of I at 3pm.

Top man for the Cork outfit will be corner specialist John Jermyn, who is enjoying an early season goal-streak, but Pembroke will be confident going into the tie after recent wins over Glenanne and Monkstown in the league.

The Irish Hockey League is made up of 12 participating teams in each of the Men’s & Women’s leagues, split into two pools of six playing five games throughout the season.

The Irish Hockey League has adopted a number of rule changes from the EHL, to create a more free flowing, exciting and faster game, a full set of rules and regulations aswell as other useful documents are available under the documents section of this website.

Points allocation for the IHL:

The Men’s and Ladies 2nds earned two away fixtures up north in the 1st round of the Irish Junior Cup (thanks to Paddy Deering, assisting with draw!) The Men will face Instonians in Belfast while the Ladies 2nds will travel to Hillsborough to face Lisnargarvey, last season’s beaten finalists. Both ties Saturday, December 3rd.

Following their comprehensive win over Clontarf in Round 1, the Men face a mouth-watering tie against Monkstown, in Rathdown on November 12th. The Ladies were knocked out by Alex last weekend in the Ladies competition.