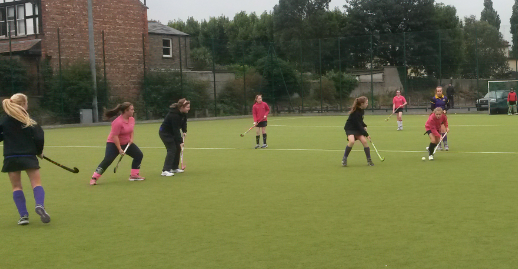 Pembroke started the match well, dominating for much of opening half. Anna O’Connor and new recruit, Rachel Alken, played well in midfield with each of the girls breaking down Stillorgan play and counter-attacking confidently. Emily Gibson and Molly Ryan played particularly well, with both girls taking their chances and challenging the Stillorgan defence at every opportunity.

After a few early misses, Molly claimed the first PW goal in the 6th minute, she followed this with another two over the course of the match.

Despite PW’s initial dominance, Stillorgan began to pressure. Luckily, Hannah Moran and Isabelle Dillon played brilliantly in the back, and both made some really important saves.

There was a definite dip in concentration levels in the second half, however, and Stillorgan powered their way back in scoring 3 goals. Emily McCarthy showed her skills as a defensive mid, clearing a couple of shorties. Equally, Andrea Reade and Eleanor Cripwell proved their versatility playing in several positions throughout the match.

Overall, everyone played well, but Man of the Match went to hat trick hero, Molly!