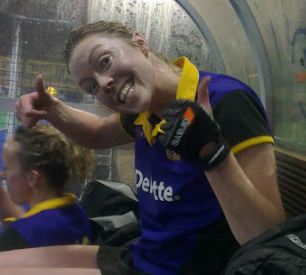 The 2nds lined out on Monday night against Newbridge for game 13 of the league knowing a win would put them 6 points clear at the top of the table clear of Loreto who they meet on Saturday.

After Mick had baffled the squad with some thought-provoking brain exercises to shake off the work day in the team talk the girls took to the pitch. It looked like the brain challenges did the trick as the 2nds started very well and after 10 minutes it looked like it was going to be a long night for Newbridge. However the travelling team regained some momentum and created some very good counter attacks which left the Pembroke defence scrambling to get back and cover. Lisa in goals was called into action on a number of occasions to keep the visitors at bay.
It was an even contest, with both sides creating chances and the Newbridge keeper made some excellent saves to keep the home team frustrated. However Pembroke finally got the breakthrough with some good movement and excellent follow up play to force a penalty stroke when a Newbridge defender saved with her foot on the line. Holly stepped up to take the penalty stroke and slotted home to go to 1 nil, which remained the scoreline until half time.

Almost immediately from the re-start Pembroke were a different team, and within minutes had won a corner. In a momentous occasion, the ‘Lou T’, named in honour of
its most prolific scorer last year, was resurrected for the first time this season to great effect. Ciara Howard finished off the move with ease to take the II’s to a 2-0 lead. Minutes later the call from the bench was the same for the next corner and again, Ciara found the net. Shortly after that Orla Canavan got her opportunity at her first goal of the season (Ciara having been subbed off immediately after scoring her second) when the 2nds went 3 for 3 from the same corner move. It put the 2nds in a commanding lead of 4 – 0 with about 15 mins remaining.

Viv Fenton received a green card for mouthing at the umpires – I think she was arguing points of order and hockey etiquette -which reduced the II’s to ten players for a few minutes. In spite of this the forwards forced another corner, Shona Doyle being denied by a Newbridge foot. There was a minor panic in the circle when it was realised the Newbridge foot belonged to someone who was getting married in the coming weeks, but all were assured she was ok and no damage had been done.

The game finished 4-nil and leaves Pembroke 2nds top of the table with 5 games to go. Much thanks to all who stayed on after training to support, and in particular to Robbie Meany who stood out on the balcony and roared on the team from start to finish.