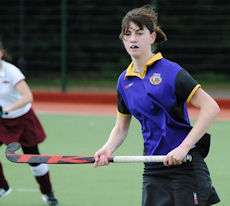 The 2nds were lining out having lost two of their back line since their last game – Tara Junghenn broke her thumb in a school match which is likely to have her side-lined well into December, and Ciara Howard tore both her calf and hamstring in an unfortunate slip at training. It was also Paddy Good’s first time to attend a game in his new role as asst coach with Ronan having been away for the start of the season, so the pressure was on to see if his appearance would coincide with a dip in form for the Pembroke 2s!

From the outset, the Pembroke ladies controlled the game, and the high-work rate of the forwards and mids on the press put the Alex backline under pressure. Pembroke had all the chances, but failed to convert the high rate of possession, with the Alex keeper making a number of great saves to deny an opening goal in the first half. The Alex attacks were limited, and largely contained before they reached the circle. They did force a short corner in the first half, but it was deemed dangerous after Fiona O’Donovan masterfully took the ball off the line at chest height.

In the second half Pembroke won a run of short corners and finally broke the deadlock to go 1-0 ahead. Elaine Thompson recovered well after a mis-trap to find Eimear McCarthy on the top of the D who reversed the ball down the line for Shona Doyle to finish off. The second goal came shortly after, when the keeper got a save on a shot and Anna O’Neill made no mistake firing the rebounding ball into the back of the net. The game finished at 2 nil, a replica score line of each of the previous 3 games

The 2nds took on Hermes at St Andrews in their 5th game of the 2013 league campaign. It was a nervy start from the Pembroke side, and though holding a lot of possession were unable to get any results inside the Hermes 25. The Hermes side were fast on the counter, and their movement up front pulled the Pembroke back line out of shape forcing some last minute scrambling to clear the ball.

After 15 minutes Shona Doyle was subbed on, and had an immediate impact. In a superb solo effort she attacked from inside her own half and charged towards the Hermes circle. Taking a very quick free she dinked past the solid defensive line before smashing the ball into the goal. That opened the flood gates, and Anna O’Grady once again showed her strength on the ball, driving the baseline and picking out Elaine Thompson on the p-spot to fire home. Eimear Mc Carthy took Pembroke to 3-0 with a straight strike, and Anna O’Neil showed some great perseverance by digging the ball out from under the keeper and flicking it home to go 4-0 up at half time. The second half was a different game, with Hermes changing up a gear and their stepping up their press.

The Pembroke backline took a while to get to grips with the adjustments, but Joanna McDonnell, having a MOTM performance in RB, took it in her stride and cleared her lines well. Sarah McCready, returning from injury, showed some great skills in holding up the ball in the corner before weaving through three tackles and finding Lizzie de Araugo at the top of the D to strike home with a beautiful curling shot that just dipped in around the post at the last second for 5-0.

Anna O’Grady made it 6-0 with about 15 minutes to go which was fitting reward for her hard work all through the game. Hermes to their absolute credit never gave up, and a bouncing ball caught three Pembroke defenders off guard leaving Jessie Elliott in a 3 v 1 situation in the circle. She made the first save, but Hermes followed up well and found the backboard. The scoreline finished 6-1 to Pembroke, finally breaking through the two-goal barrier.

Top of the league

5 wins from 5 catapult the Ladies to the top of Div 2 – after Loreto were beaten by UCD. The girls travel to Antrim this Saturday where begin their defence of the Irish Junior Cup – they take on Randalstown at 2.30pm.