With little or no action since November 20th the few matches which did survive a frosty weekend were a welcome relief at Serpentine Ave this weekend. The Ladies 1sts and 8ths managed to get their games played on Saturday morning, the 8ths picking up from where they left off pre-Christmas with another win over Railway. This time a 6-1 scoreline, with Katie Ackland grabbing a hatrick, while Muckross schoolgirl Sarah Twomey got the ball rolling on her Pembroke debut, slotting home after a fine break through midfield. 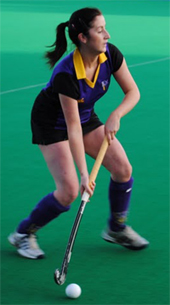 Louise won the bragging rights at home, grabbing the winning goal against Loreto in the 2nd half. Photos Emer Ryan

None of the Ladies away matches survived the cold so trips to Tullamore (6ths), Nth Kildare (2nds) and Skerries(5ths) will all have to be refixed.

The Ladies 1sts game against Hermes was switched to Serpentine with St Andrews still frozen over, 0-0 at half time but Hermes took the lead 10 mins into the second half from a stroke and never looked backed, grabbing two further goals.

The big game of the day followed with Pembroke Men taking on Glenanne, both teams locked in second place behind YMCA in the league standings. Glenanne though were off the mark quickest, with Stephen Brownlow’s bagging the first of three early on. Pembroke responded through Gordon Elliot, but Glenanne held on until the end to take the three points and it’s they who take top spot.

The Men’s 2nds fared better over Glenanne, coming away 5-0 winners, Craig Wilson, Johnny Walker, Maurice Elliot, Scott Furlong, Kirk Shimmons all scoring, while goals also abounded in their 12-0 win over UCD in the Railway Cup. On Sunday afternoon the Men’s 3rds, with a very tanned Brendon Carolan making his debut, came through their cup fixture against Railway, winning out in a penalty shoot out. David Loughrey and Michael Stiles both scored twice in the flick competition to secure passage to the quarter final. The 7ths also managed to play over the weekend, but were 3-0 loosers to Smithfield.

Elsewhere over the weekend, the Ladies 2nds kept up their excellent league form, beating Loreto 2-1 to take top spot in Division 2. St Gerard’s schoolgirl Claire Foley on her senior debut for Pembroke enjoyed an eye catching debut on the wing, and took man-of-match award from her compatriots. An early goal from Claire Picard was well taken, Mary Gamble and Claire making space with a some quick fire passing to settle Pembroke nerves, while Louise Tolerton will tell you her deflected spinning lob over goalkeeper Louisa Healy was the result of hours of practise on the training ground. Louise’s goal proved to be decisive, Stephanie Hall’s tap in with 10 minutes to go made for a nervy end to the game for the home team, Loreto certainly finished on the ascendancy but couldn’t find a way past Rachel O’ Sullivan in goals.