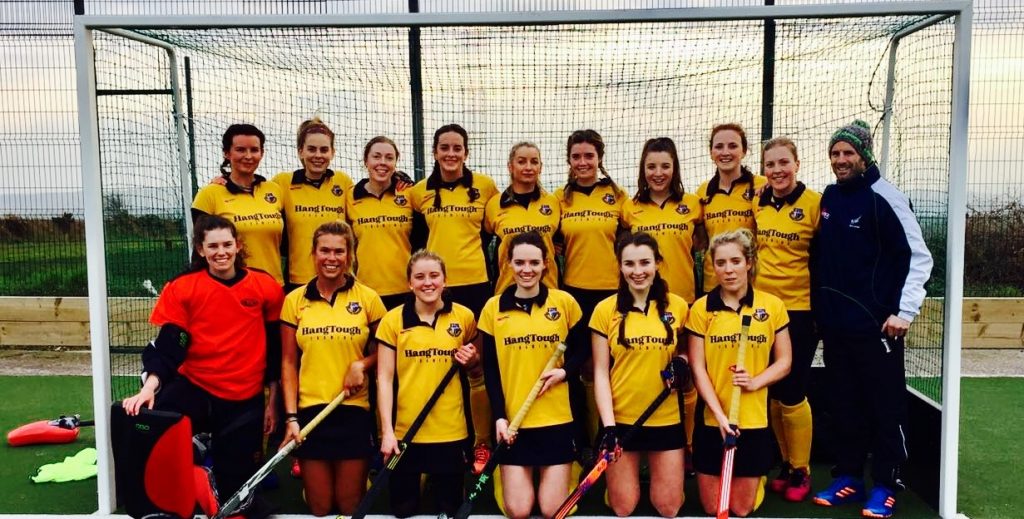 We were up bright and early to travel to Cork, leaving a frozen pitch in Pembroke at 8.30am, hoping for warmer weather as we headed South.

The journey didn’t faze us, and we forced the Harlequins keeper to make some great saves in the start of the half, during a well worked corner and a shot from Emma Keilthy. The ball eventually fell to Anouk from a long corner, and she pulled off her specialty shot, burrowing a reverse hit in the bottom right-hand corner. We played out the rest of the half as the stronger team, despite a hairy moment that required Emma Mc to clear a shot off the line. The first 10 minutes of the second half was all Pembroke, but we just couldn’t find the back of the net again.

Then it was Harlequins turn to apply the pressure, winning 2 short corners but Pembroke’s defense stood strong and weathered the storm. We were soon on the attack again, and Kylie managed to find the roof of the net from an extremely tight angle left of the goal. The final 15 minutes were a tense affair, with Harlequins stepping high, pushing a defender up to leave just 3 at the back. We cleared the ball a number of times during this frantic period.

With 5 minutes left we lost the ball on the Harlequins 25, and they broke fast to convert a good opportunity. We began to gain a bit more control of the game after that. It was 2-1 to Pembroke with 3 minutes left so Harlequins took off their keeper but it was too little too late as pembroke remained strong on the ball. A place in an Irish junior cup semi final was within touching distance and we were not letting it out of sight. Pembroke had a few chances to get a third goal, but mainly concentrated on trying to keep the ball for the last moments of the game.

There was a collective sigh of relief when the final whistle blew and then an air of excitement took over as we are in to the semi final! Thank you to all the supporters who made the long journey down to Cork. It was really appreciated and it was great to hear some supportive voices on the sideline!