Ladies 3rds still in the mix after Railway draw

Encouraged by their 3-2 victory over Clontarf, the ladies 3rds were eager to face off against their Railway Union opposition. Despite the usual parking problems one expects on an away trip to the Railway, all Pembroke members arrived eager and ready to win (eventually, eh Lorraine?). The overnight rain had altered the sportsgrounds significantly, and the team enjoyed the scenic beauty of several newly created lakes as they warmed up in near freezing conditions. The Pembroke squad began eagerly, and were bolstered by the returns of Joanna McDonnell, Annie Lawlor and Sarah Raymond to the squad. Railway started the match enthusiastically and dominated the early moments, but the Pembroke defence soaked up much of the pressure and did well to keep them out of the D. for the first 10 minutes.

The capable combination of Lyn Taylor, Sorcha Ryan, Ciara Devane, Sarah Raymond and newly recruited (borrowed) Caroline Murphy did everything to keep Railway at bay. Eventually Railway tested with a hard shot into the D aimed at an unmarked attacker at the back-post, but it was intercepted and cleared by the P.W. goalie, Steph Courtney. 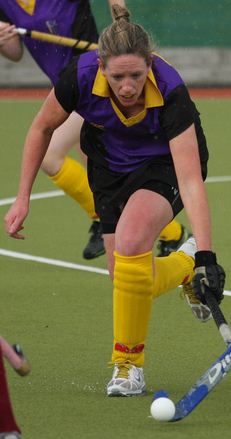 Midfield battle – Lorraine Horgan in the thick of it

Lorraine Horgan picked up the clearance in midfield and, in slipping it left to Darina Errity on the wing, PW’s first serious attack had begun. With many of the Railway squad still positioned in the Pembroke half, the Pembroke players utilised the space and pushed forward into the Railway D, taking their first goal-attempt of the day. Unfortunately, they were denied by a skilled Railway ‘keeper, and found themselves fighting for possession once again. This early attack focused the Pembroke squad and they dominated for a lot of the first half. Several times they penetrated the Railway circle, but failed to covert chances. The second half continued like the first, with Pembroke dominating and creating multiple chances.

Pembroke consistently pressurised in the Railway D., but despite winning 6 short-corners throughout the match, failed to secure a goal. This frustration boiled over when Ciara committed an offence that brought her a green card. The dying moments of the game saw the PW defence put under a lot of pressure once again. With only minutes to go, Railway had a break-away and Steph faced a 2-on-1 in the D. Luckily, the aggressive charge of a heavily padded (I swear, it’s padding) goalie distracted the attacker and she diverted it wide, securing a 0-0 draw and a point for Pembroke. The 3rds were left disappointed with the draw, but relieved to have ended with a clean-sheet.