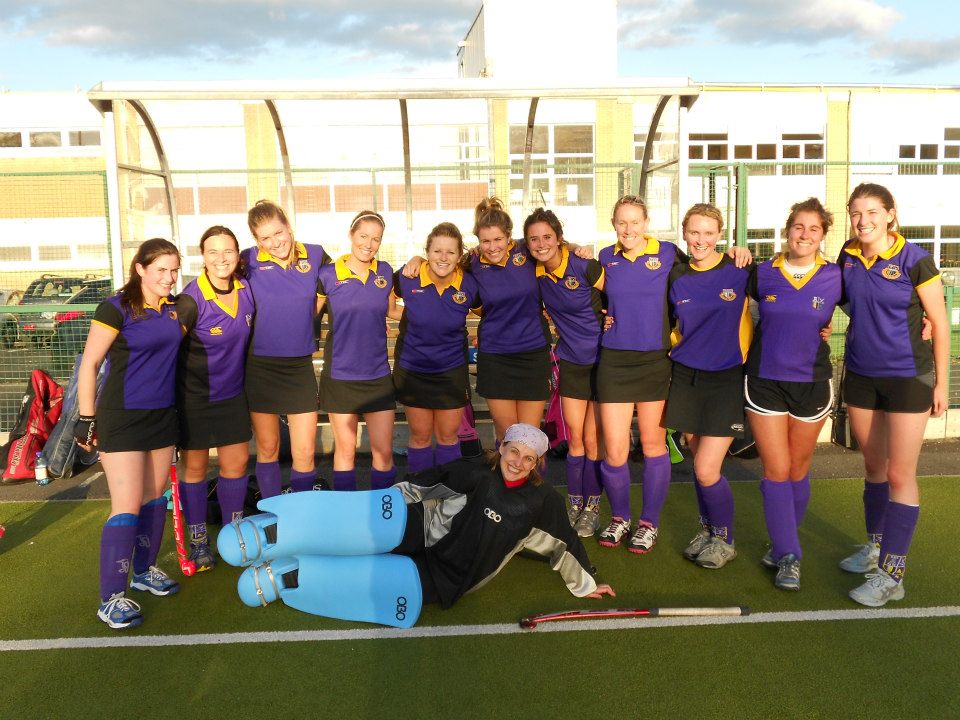 The Ladies 5ths continued their unbeaten run against Genesis on Saturday with their usual high goal scoring performance – two goals from Rebecca James and one from Ellen Flahavan sealing the points. This achievement was topped only by the defences’ first clean sheet of the season. Our claim to fame this weekend is that our keeper Claire Seymour didn’t have a single save to make throughout the game. We were missing our captain Lydia Coleman who was working on her tan for her Hallowe’en costume but we were very well minded in the capable hands of Chloe Halpenny, vice captain extraordinaire. Our dedicated captain showed her renewed commitment to the job on Monday evening arriving to training suitcase in hand on route from the airport. What a captain…what a team! 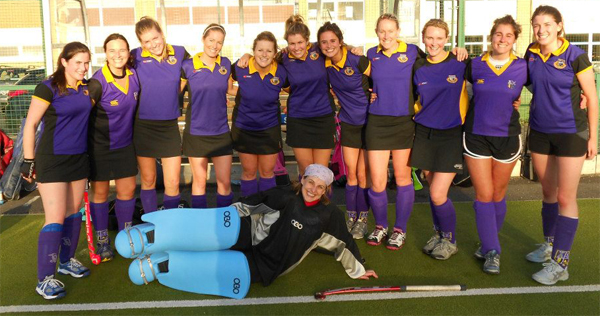 Mossie’s 4ths also continued their unbeaten streak over the weekend. For coach Elliot it proved to be another perfect weekend all round – 3 wins from a possible 3, and the second treble weekend in a row! (confused? so are we!) On Wednesday the 4ths had played their back match against Trinity. With two good wins to date they were feeling confident, but Trinity put up a good fight, and capitalised on a defensive error to open the scoring in the second half. With some calls not going their way the 4s struggled to get back on level footing. They eventually scored an equaliser when Louise Monahan turned her player and placed the ball into the path of Holly Porter who finished well but the game ended level.

Saturdays’ game in Serpentine saw the 4ths pitted against Corinthians with a 5pm tip off. The midweek disappointment seemed forgotten as Pembroke dominated the game from the start. Elaine Thompson had an excellent game and caused endless problems for the Corinthians defence.

Having found the net once already, Elaine stepped up to take a stroke, awarded when the Corinthians defender used her knee to stop the ball on the line from a short. Elaine slotted home to take the 4’s to half time with a 2 nil lead. The girls certainly didn’t lack the killer instinct as the came out for the second half looking for more, and thoroughly entertained the sizeable crowd of supporters on the balcony. Jen Tutty powered around midfield, and worked well with Ais Sherriff to close down any Corinthians threat. Ali Piggot popped up in all the right places up front and threaded through some lovely passes for the other forwards to run onto. The hard work was finally rewarded when some nice baseline play put the ball into the circle and Julie Delany finished off the move in style, roofing the ball into the net and beyond the keepers reach. The crowd (and the umpire) cheered in appreciation and the game finished 3-0 to Pembroke, unbeaten after 4 games.

The Ladies 1sts had to wait until Sunday to play, with their scheduled Saturday league game postponed. They faced Railway in the first round of the Jacqui Potter cup, a tough challenge considering the current league form of the Sandymount outfit that were also boosted by the return of their internationals. Pembroke started very well, winning a corner in the opening minutes of the game. About 15 mins in, Railway picked out an unmarked player at the top of the D. Tackled from behind, the umpire adjudged it to be worthy of a penalty stroke and Sinead Dooley duly converted. The girls showed great spirit and responded well. In a solo effort, Sophie Marshall powered down the right and won a corner for Pembroke. Claire Mulcahy struck the ball from the top and Sophie deflected the ball into the roof of the net to draw level. Pembroke pressed on, and were unlucky not to get a second shortly afterwards. Railway found a way through before half time to take the lead into the break. The game remained at that score until the dying minutes when the depth of the Railway squad eventually overcame the impressive Pembroke effort, scoring two goals in quick succession. MOTM performances from Claire Mulcahy and Rebecca Sweetnam, and also congrats to Anna O’Connell in her Div 1 debut in goal. We also wish a speedy recovery to Jane Brownlee who suffered a broken collar bone during the game. 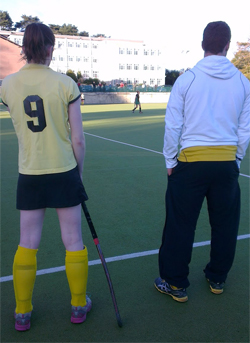 The Ladies 2nds had an early start with a 10am tip off in Naas v Newbridge on Saturday morning. Pembroke opened at a blistering pace and Susan Ryan, with back to goal, whipped in a bouncing ball on her reverse, just minutes after the starting whistle. The Newbridge forward movement caused trouble for the defence and some slack marking allowed them to find the equaliser shortly after. That was the shock that was needed, and Pembroke took control of the game from that point. The pitch was extremely slippery – Clara Chamberlayne showed some excellent balancing skills at one point when she hydroplaned while being tackled, yet still managed to come away with the ball, and Eimear Mc Carthy fell over even more than usual.

Anna O’Neill opened her scoring account for the season with a bang, finding the net twice, and Holly Jones pounced on a loose ball to take the tally to 4. The game finished 4-1 to Pembroke, and the twos continued their strong start to the season with three wins from three. Special mention must go to Emma Keilthy who made the early trek to Naas to umpire the game.

The 2’s faced Trinity 2nds away on Sunday in their second game of the weekend. They couldn’t ask for a better start, when the ball pinged from the defence right up to the forwards for Holly Jones to power home with just 30 seconds on the clock.

Pembroke worked hard, and Shona Doyle was extremely unlucky not to reap a reward from her tireless running on numerous occasions. Viv Fenton scored a second goal finding the bottom corner with a well placed slap from the top of the D. Sarah McCready made her 2’s debut and had an excellent game rotating into RB. Joanna McDonnell almost scored an amazing solo effort, picking the ball up on the half way and having beaten the keeper just missed the goal by inches. Despite peppering the Trinity goal with shots in the second half Pembroke could not build on the 2 goal lead, and the game finished 2-0. The win meant Mick O’Connor achieved a ‘double-double’ with wins in both his own games as well as for the ladies II’s.

The Ladies 3rds lined out against much fancied Muckross in Teresians on Saturday, with Sarah McCready and Ruth Dillon making their debuts in Division 3. The first half was played at an extremely high tempo, but was contained around the mid-field, both defences holding up well. Sarah McCready almost broke the deadlock shortly before the break with a stunning reverse shot which stretched ex-Pembroke 1s keeper Jane Coyne. In the second half it was end-to-end action and the spectators were treated to an exciting battle between the two teams. The Pembroke defence were excellent, and Sorcha Ryan put in a display that would be worthy of any MOTM award. Ali O’Mahony showed no mercy and at one point somehow flipped one of the Muckross girls over her shoulder! Joanna McDonnell powered onto a loose ball on the half way and left the Muckross defence for dead, sprinting towards the goal at pace. The keeper cleared her out and the umpire had no hesitation in awarding a stroke which Orla Canavan, fresh off the plane from her holidays, stepped up to take. She lifted it beautifully towards the top corner, but again, the Muckross keeper made an excellent save to keep score level. The game finished a draw, which was probably a fair result given the chances both teams had.

The Ladies 6ths headed to Mount Temple School for their Clontarf encounter guns blazing for a first win of the season. Birthday girl Lynne Boucher scored two goals with Harriet Meagher sneaking a third. Despite Clontarf getting one back, the 6ths won 3-1! Man of the match went to Tansy Skidmore who fought for every last ball and got ‘beyond involved’! Great 3 points out in Clontarf.

The Ladies 7ths will feel unlucky not to have come away with 3 points from Terenure – they were 3-1 up at half time. Still a point on the road is not to be sniffed at.

The Ladies 8ths will be seeking home comforts after played their 4th away game on the trot, this time in Corinthians – they lost 3-1.
Thanks to everyone who sent in updates from the weekend – please send all you snaps and match reports to web@pembrokewanderers.ie or tweet @PWHC
[nggallery id=33]