Jen Tutty’s ladies took on a feisty St Brendan’s last Saturday. St Brendan’s came out with a fast and fierce attitude, the Pembroke ladies might of looked a little shaken in the first five minutes which did show when they conceded a goal. After one conceded goal, the 4’s quickly regrouped, shook themselves up a little and started to show their usual winning attitude. Some fast and long balls from our defence upfront gave the forwards a lot to play with.

St Brendan’s defence where fast and strong and defiantly where not going to give any easy goals away. Pembroke managed to steal a few short corners in the first half, finally converting one into a goal. 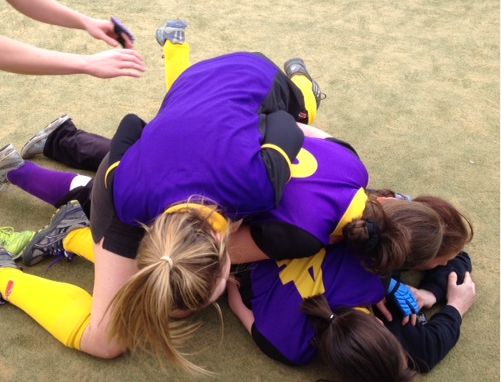 Happy days – top of the league!

At half time the 4s realised that they had won nothing yet and with everyone’s need to up their game, the second half started out with some real force, the midfield worked hard from the get go, with constant substitutions, we had a lot of fresh legs upfront, this may have helped the three goals which came in this half. St Brendan’s managed to steal one more in the second half but it was the 4’s who came out triumphant yet again with a lovely 4-2 win.