Hermes succombed to a Pembroke side at the semi-final stage of Cup competition for the second time in a matter of weeks following a win for the 6ths yesterday evening at Serpentine. The Booterstown girls had excellent passages of play and posession but the Pembroke defence kept going for 90mins and were deserved of their spot in the final. Sinead Guilfoyle, enjoying a tremendous season in goals, made a series of fantastic saves throughout the match while Ciara Hughes, back after a knee injury risked life and limb on the goal line on several occasions when a winning Hermes goal seemed a certainty. Barbara Kearney, Sally Ann and captain Karen McCarthy all had fantastic games at the back on  a day when nothing less than 100%  would get them to the Final. 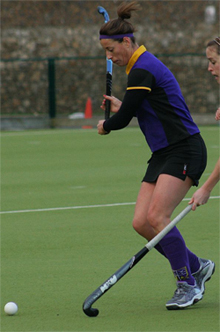 Sal hit a wonder strike to give Pembroke the lead

The girls enjoyed their best passages of play at the beginning, and from a well earned corner, Sal first timed the drag out to the top of the D and smashed home to give the girls an early 1-0 win. Credit to Hermes, who fought back to 1-1 within minutes, another excellent goal from a short corner routine signalling their intentions. The rest if the half remained pretty close, Hermes edging the corner count and improving all the time.

Up front Pembroke rotated Ais Schutte, Jude Hayward and Marianne Murphy while Niamh Garvey, who has played much of her hockey with the 7ths this season, had a superb outing up against an experienced Hermes midfield in the the centre of the pitch for Pembroke.

It was Hermes though who looked most likely to take the tie in normal time, from a loose ball in midfield they drove down the left wing before a dangerous cross circle ball was fired past Sinead’s left hand and off the inside of the post. Most supporters thought the ball had crossed the line but miraculously it flew back out and across goal.

In extra time, Hermes must have had 5/6 short corners to Pembroke’s 1, but Pembroke came closet to scoring, Marianne taking a lovely switch from Ais Schutte and firing home, but the goal was disallowed due to an earlier infringment. Hermes had an awful turn of luck when influential midfield Mo Flahive turned on her ankle and was carried from the field, the hope is that her injury isn’t as bad as first seemed. Neither side looked likely to score following this and flicks inevitably followed.

Pembroke must have felt confident with Sinead between the sticks and having already come through a strokes competition at the Qtr Final stage, but with a large crowd watching and a final at stake it would come down to who could hold their nerve in front of goal the most. Ais Schutte, Dalkey school girl Ellen O’ Caroll, and all dispatched cooly, while Sinead made 2 fantastic saves, one a diving low to her left to hand Louise Lacey the chance to Pembroke into the final. Louise Lacey then casually stepped up and swept the ball low and hard to the keepers right side, smack bang into the corner to take the tie for Pembroke.