Ladies Dinner calls on members to GET INVOLVED!

Another memorable Ladies Dinner brought the season officially to a close, and with that a well earned rest for Captain Ava Cooper and her hard working committee. A new mantra for next season has officially been coined by the fab Ladies 6ths – ‘GET INVOLVED’ and adopted by all present to loud cheers of enthusiasm, watch out when Ava comes calling next season!

Mossie and Mick’s own end of season liquid ‘celebration’ on the bus back from ‘Garvey ensured it was going to be a very raucous evening and Mick had to be reigned in on several occasion by his captain for some marginally ungentlemanly behaviour. It was only when the Ladies 2nds eventually picked up the Batt Bowl and Agnes Lewis Perpetual scoring mug could he relax knowing that his work for the year ‘was done’.

Mossie to his credit spent most of the evening teaching the 4ths new Pembroke chants (P.E.M..) and something about ‘pretending to score a goal’, which will no doubt come in handy next season, especially if the much mooted pre-season tour of Holland materializes. How the 4ths will fare against dutch opposition is anyone’s guess.

Elsewhere biggest gaffe on the night was 6ths captain Roisin Watson forgetting to thank (best friend of 16 years) Darina Errity for coaching her team of the last 6 months in her ‘thank you’ speech. No amount of apologies or drinks could console Coach Errity in the bar afterwards, still time will heal and hopefully the management team will be restored in time again for next season.

Lyn Taylor and Ciara Hughes were deserving winners of the ‘Members of the Year’ award, these girls really were the epitome of ‘getting involved’ and were a a huge help to Ava and the Committee all season long.

For Jude Hayward there was disappointment in not retaining the Agnes Lewis Perpetual Mug for a 3rd season running, Hayward warmly congratulated Rachel McGrath on her win but denied that ‘not being on the selection committee this season’ had contributed to a slightly inferior goal tally. The 2nds also took the much coveted Batt Bowl for scoring most goals, special mention to the Ladies 7ths who had a brilliant season and pushed them all the way. 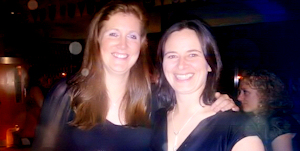 Senior ‘Get Involved’ Member of the Year
Lyn Taylor

Junior ‘Get Involved’ Member of the Year
Ciara Hughes

Thanks to Bernie and Becca for the delicious food & being so organised, and to the Mens 1sts for stepping up and waitering on the night after their long day up and down to ‘Garvey. Not easy keeping 90 hungry screaming women happy, but they did extremely well under pressure. Thanks also to Chris for his help leading up to the night and helping out on the night.

HUGE congratulations to Ava for organising everything on Saturday and all season long, thanks Ava! See you all in August!