With 93 screaming women, Robbie, Ian, Simon, Eoin and Dave it was always going to be a raucous occasion. Bernie Barry did a fantastic job in the kitchen keeping the masses happy while Helen Walsh deserves special praise for jumping in and lending a hand when needed.

Winners on the night 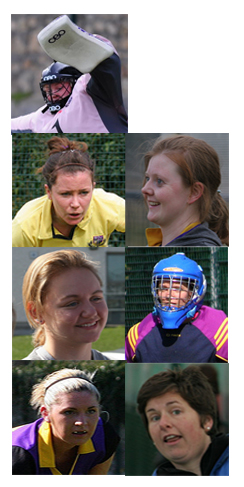 Other recognition (choice selection):
Sarah Williams was recognised for keeping Coca Cola Inc. afloat in tough times.
Dee’s ability to keep a respectful Golf handicap during her Presidency was marvelled at.
Lyn Taylor’s peacekeeping abilities in times of crisis were recognised.
Sandra, Ciara and Jude’s unorthodox selecting methods were noted.
Simon Thornton’s efforts to promote unity btwn Mens and Ladies sections was commended.
Coco Pops won special praise for her choice of outdoor supporter’s wear, followed closely by the Ladies 3rds selection of mustard yellow hoodies for their Cup Final.

Thanks
Big thanks to Bernie and Helen on a flawless service.
Jude, Ciara, Aoife, Noelle and Chris all helped get the room ready – thanks all.
Gilsey, Ronan, Ken and Paddy from the Mens 1sts also revealed themselves as excellent waiters. The lads made 480 in total on the night – thanks everyone for contributing this fantastic amount to the Club’s EHL fund. Many thanks also to Eleni Henry who contributed a large amount of the photos you saw on the display. You’ll find Eleni’s pictures on her Flickr site.