The Ladies were edged out of this years IHL following a heart-breaking 5-4 loss away to Railway Union this afternoon at Park Avenue. The girls fought back from 4-1 down to deservedly level it with with only minutes to go but a Railway goal scored from a short corner on the final whistle, denied them the draw they needed to advance to the semi final stages.

Cork Harlequins win over Ards means that they, and Railway advance to the semi-final stages. In Pool B Hermes and Pegasus took the other two semi-final spots.

In a 9 goal fest in Park Avenue Railway came out narrow winners. Pembroke started the game stronger, looking for the win they needed to qualify. They were the first to get on the score sheet with Sarah Clarke scoring her trade mark short corner strike from the first corner of the match. However, it was Railway who had the best of the play in the second quarter Nikki Evans finishing off a good run by Kate Dillon and Jean McDonnell putting away a corner just before half time. Half time score: Railway 2 – Pembroke 1. 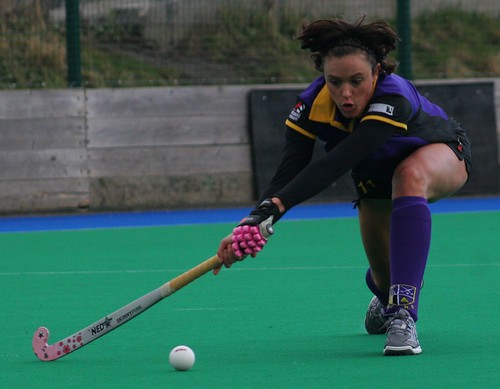 Anli Koetze was voted Man of the Match

Railway edged further ahead in the third quarter, an Isobel Joyce strike from the edge of the circle taking a deflection off a Pembroke stick into the goal. Their fourth goal came after good work by Sinead Walsh was finished by Nikki Evans for her second goal of the day. For many it looked like Railway now had the game in the bag with bonus point secure but Pembroke had other ideas adding their second goal one minute later, Shona Doyle pouncing on a corner rebound off the cross bar. The match entered the last quarter with Railway 2 goals the better in 6 but Pembroke, in a strong comeback, were soon on level terms Rachel McKeon finishing off a good Pembroke move and then player of the match Anli Kotze sending the ball into the net from a short corner strike. 4 all and with Pembroke having an eye on the Cork Harlequins/Ards result there was all to play for.

The last 15 minutes were a tempestuous affair with Natalie Fulton spending 2 minutes in the sin bin. Railway were awarded a penalty corner on the final hooter which Jean McDonnell crashed into the goal, to win a competitive encounter.