A great weekend’s action for the Ladies saw 4 wins, 2 draws and zero losses recorded over two days of competition.
Almost a perfect weekend but not quite! Most importantly the Ladies 5ths came through probably the toughest Cup Qtr Final match up, to knock a very talented UCD 3rds side out of the competition, a 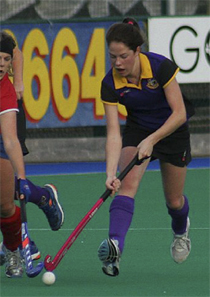 fter the sides finished 1-1 AET. Susan Prendeville, currently deputising as captain for the injured Genevieve Faye, broke the deadlock mid way through the first half, after combining well with Annie Lawlor in a smart corner routine. Diane Pappin and Emer Fitzpatrick soaked up an enormous amount of College forward line pressure exceptionally well –  College were always dangerous though and there was little that could be done when their Sweeper smashed home following a well worked corner just after the break Sorcha Cunningham was in flying form between the posts for the home side, keeping Pembroke in it with several  2nd half saves when UCD looked odds on to take the lead.Both teams looked anxious in extra time and penalties were the likliest outcome. UCD, however only managed to score their first flick, one hit the post while Sorcha made two excellent saves to her left, the final one giving Barbara Treacy’s side victory by 3 strokes to 1.

The girls now join the 3rds, 6ths and 8ths in the Cup Semi’s. THe Ladies 1sts play their Cup Qtr next Sunday away in Old
Alex.

Elsewhere the Ladies 2nds drew 1-1 with Hermes on Saturday and had a 3-0 home win against Clontarf on Sunday. Anli Koetze got on the scoresheet in both games while Katherine Duff marked her return to competitive hockey (from Domestic Leave) with a top of the D strike against Clontarf  to ensure the 3 points.

The Ladies 3rds had an excellent 2-0 win over Genesis 2nds on Saturday in UCD, Louise Monaghan opening with a w 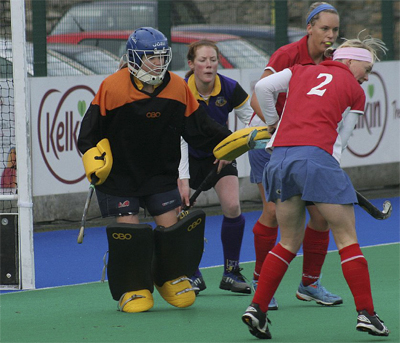 onder goal inside 3 minutes, Fiona Keenan doubling the lead mere mintues later.  The Ladies 6ths earned a solid 0-0 draw at home to an a tough Hermes side, they had Barbara kearney and Sinead Guilfoyle to thank for a well earned clean-sheet. The draw keeps them top of the league, but they will meet Hermes again in a months time, this time in the Cup Semi’s!!
Not wanting to let the side down the Ladies 8ths were determined to take the 3 points against a Fingal side who had hammered them on the opening day of the season. Some say it might have been the inspired form Elanor Maloney was in,  some (one person in particular) will point to the tactical desicion making from Jude Hayward on the bench, what was certain was the 3 points earned and with it the Ladies 8ths pull away from the bottom of the table.,