Ladies squeeze through to another UCD Irish Cup Final date 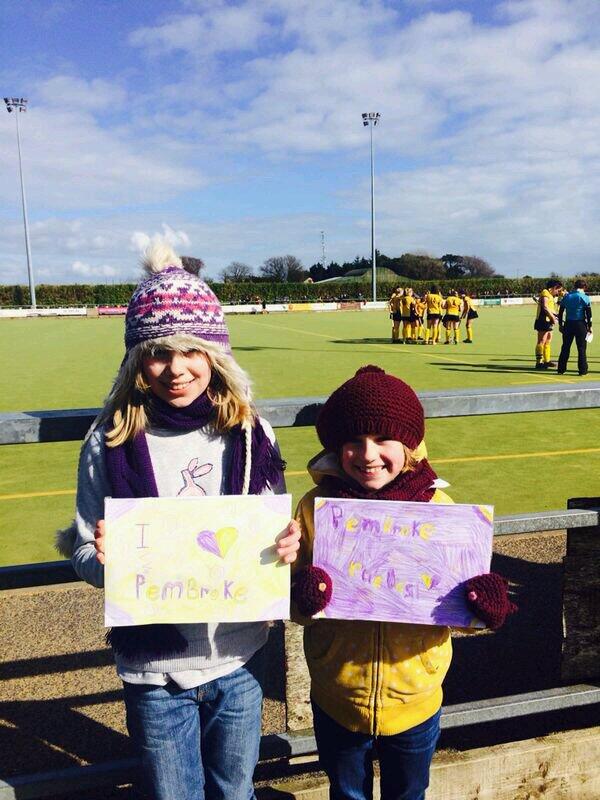 In a repeat of last year’s IJC semi-final the Ladies 2s headed to Cork, but this year it was Cork Harlequins instead of Ashton that stood between Pembroke and a third consecutive IJC final appearance.

Inspiring words from The Boss set the tone, and the girls left the dressing room fired up and ready to go. However, it was Quins who set the pace from the starting whistle, with Karen Bateman and Rachel Kohler pulling the strings and causing difficulties for the travelling team. Jessie Elliott was called into action within minutes, making a great save to deny Bateman from the top of the D. Pembroke struggled to get a hold of the game, and conceded a number of shorts, but the defence performed well and kept Quins at bay.

Mid-way through the first half, and very much against the run of play, some good attacking play started by Nadia Douglas down the left found Emma Keilthy who won a corner after her trademark mazy run around the edge of the circle. Eimear sent in a straight strike which beat the keeper, but was stopped on the line by a defenders foot and the stroke was given. Emma slotted home an excellent stroke and Pembroke took the lead.

The visitors went through a bit of a purple patch after that, creating some good attacking moves, but falling short when it came to results in the circle. Ciara Howard came off the bench and had an immediate impact in lifting the team with some great movement down the right. However, the two Quins danger-players never let up, and Kohler succeeded in winning a corner and getting Eimear green-carded down the other end for a (very harshly judged!) back stick on the ball. With the post player off the defence rearranged quickly, but an excellent Quins corner, deflected high off the p-spot, equalised proceedings just before half time.

Tough words from Ronan and Paddy, who took a time out from prepping for his own game straight after, and the girls went out with a renewed sense of urgency. The second half was a more balanced affair, and Fiona O’Donovan and Jane Brownlee did excellent individual jobs of quelling the impact of Bateman and Kohler respectively. Quins did win a series of corners in the second half against just one for Pembroke, however neither side was able to convert their chances and the game finished 1-1 after 70 minutes. In extra time Pembroke had the upper hand slightly, with Joanna McDonnell making good ground up the right out of defence, but no goals were forthcoming and it finished all square after E/T. We were going to strokes!

First up were Quins, and Karen Bateman scored. Maeve Faherty stepped up for Pembroke first, but her effort was saved. Former Pembroke defender Alma Carey was next, and her rocket shot crashed off the upright and came back out. Emma Keilthy was up next for Pembroke and in a replica of her earlier stroke coolly fired home, 1-1. Former 2s player and last year’s team manager Val Fenton went next for Quins and scored, followed by Shona for Pembroke who also scored, 2-2 after 3 rounds. Jessie Elliott then saved the next Quins one, only for Eimear’s stroke to be saved by Quins in return, still 2-2 with just one each left to go.

Fiona dribbles it in! PW through!!!!

Jessie Elliot pulled off an incredible stick save in the top right corner to deny Quins, and it all came down to Pembroke’s last player, Fiona O’Donovan. She later informed us that she had never taken a competitive stroke before this one!! Her effort was slightly mis-hit, and the crowd held its breath as the ball dribbled towards the goal. However, the keeper had been sent the wrong way and could only watch as the ball crept in over the goal line. Pembroke had won by the narrowest of margins and the girls went ballistic! Heart attack stuff and the cruellest way to win a game, but Pembroke were delighted to escape from Quin’s with the result. 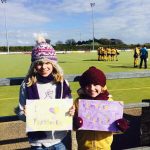 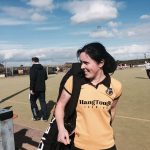 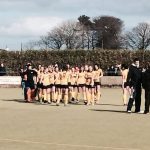 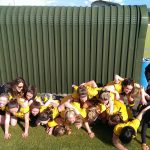 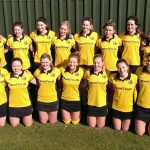 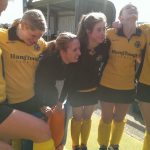 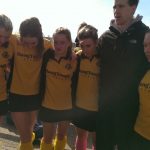 As always, MASSIVE thanks to the everyone who came out in force to support, it was hugely encouraging to hear the constant cheering from the side-lines for the whole game.
Pembroke face UCD in the Irish Junior Cup final on Sunday April 13th, replicating the ISC line up final a few weeks back.