Anna O’Neill snatched a late winner for Pembroke at Whitechurch on Saturday with the Ladies overcoming Corinthians in this Division 1 fixture. Pembroke started the stronger team and their first goal came in the opening quarter when Sarah Clarke banged home a trademark straight corner strike. However Corinthian profited from a defensive mishap picking up a loose pass, before driving into the circle to hit home for 1-1 at the interval which made for a lively second half encounter. 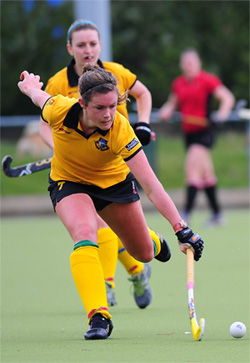 Clarkie got on the score-sheet for the 3rd week running. Photo Adrian Boehm

Elaine Hall restored the lead with a near post finish from the tightest of angles, her first senior 1 goal of the season, but shortly after Corinthian levelled again from a penalty corner and looked to have sealed a point.

However Sarah Clarke drilled the ball across the circle for Anna O’Neill to get the vital touch two minutes from time much to the delight of both coaches Justin and Alec after many hours spent coaching that very move in training! Corinthian did have the opportunity to level with a penalty corner awarded on the final whistle but Rachel O’Sullivan and the penalty corner defence stood strong to clear the ball for victory!

The Ladies again provided a very entertaining game with lots of goals bringing their tally to 8 goals in 2 games. Amongst the positives were a lot of new names on the score sheet in recent weeks for their 1st Senior goals. Claire Foley (St. Gerards) the youngest member of the team set up the first goal for Emma Keilthy at Bray last weekend before scoring her 1st goal for Pembroke with some excellent play in the 5-4 thriller. Avril Dooley (Mount Anville) also bagged herself her 1st goal for Pembroke from a short corner rebound in the semi- final defeat to UCD in the Jacqui Potter Cup. Olivia Smartt (Mount Sackville) who has impressed in midfield this season is now looking to get her name on the score sheet in the final 2 games!!! Well done girls, keep it going!

Elsewhere the Ladies 2nds kept up the pressure in Div 2 with a 3-1 win over Muckross, with 5 games left to go it’s still too close to call at the top of this division. The Ladies 3rds play Naas on Sunday in their Cup Semi-final – home at 4pm, support would be great! The Ladies 6ths were beaten in their Cup Semi last weekend, despite Sinead Guilfoyle having her another storming performance – Railway proving to be too strong on the day though. Youngster Sarah Twomey had another good outing in midfield, getting a goal along the the way, well done Sarah. The Ladies 8th lost their recent Cup game in Navan, the girls were always going to be underdogs with the match taking place on grit but it was a great performance from Olwen Scally’s side and they gave a great account of themselves.

Good news though on the league side of things though with the Ladies 7ths (Lynn Boucher getting the vital goal) and the 8ths picking up wins at the weekend, vital at this stage of the season! Well done Sarah and Olwen.

On the Men’s side, Pembroke face a battle royale this Saturday in their IHL final pool game against Monkstown. The lads must win to qualify for the knockout stages. The game starts at 2.45pm and we are expecting a great crowd for what should be a brilliant game. Don’t forget the BBQ will be going all day, and all are welcome down.

Elsewhere the Men’s 3rds came out on the wrong side of a 3-1 score-line against Monkstown at Rathdown Park in their league fixture on Saturday, their first defeat of the season, in a game where the home team’s passing accuracy, not a lack of desire from the Pembroke team ultimately made the difference. The fifths and sixths both won scoring seven goals between them which particularily helps the fifth eleven alley any relegation fears. Here’s wishing the firsts the best of luck on Saturday in the critical Monkstown IHL fixture, with the winner definite participants in the IHL finals weekend.