Ladies 1sts bag win on the road and 3 vital points 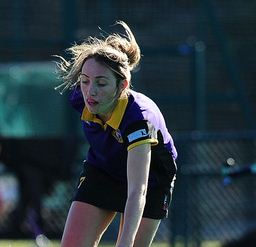 After deciding that tying 3 games was a considerably inefficient (and somewhat deflating) way to earn 3 points, the Ladies Firsts opted for a more direct approach to doubling their tally in Division 1, overcoming a dogged Glenanne side to creep up to 8th place, on level points with Corinthians on the league table.

With canine mascots at the poodle-parlour, forgotten hockey balls and a wandering Pillow (who was M.I.A. in Dublin 24), there was a collective lost-puppy feeling in the camp. But with a little bit of Kelly Scott charm and one man’s ability to swallow his pride (and ask for directions), the fixture got off to a whirlwind start at Glenanne Park.

The boxing ring was positioned between the 25’s, and while the backs and forwards enjoyed the spectacle, Maebh Horan and Katie O’Byrne donned the gloves to keep the industrious Audrey McCormack and her flankers at bay. A number of fruitless penalty corners were exchanged, one in which the Glens hoped to dupe the umpires by celebrating a high first shot on goal. Good effort, but no room for Oscars in Ali Keogh’s pockets…

When the bell rang at the end of the first bout, Pembroke were looking a little on the ropes, but never down-and-out. A half-time ribbing from the lads (with a few spirited interjections) saw a rejuvenated side bare their teeth in the second half. Unwilling to settle for another draw, the team rallied to score 2 goals in quick succession, snuffing out the attacking threat from Glenanne.

The first of these was a deft touch from Sophie ‘Teckers’ Marshall, who connected with a cross drilled in by Rachel Scott, after some excellent thievery by Sorcha Clarke on the opposition 25-yard line. Moments later, Maebh Horan (in the throws of her ‘possessed phase’) delivered a similar ball from the right-hand side, this time deflecting up off a defenders stick, only for Katie O’Byrne to touch home, mid-air, on the turn, from a tight angle – poetry in motion!!

The defense held tight for an inaugural 2012/13 clean sheet, with Ailbhe Coyle and Clare Mul the ‘nuggets’ to their Happy Meal. The Glens felt hard done-by when the umpire, perceived to have been playing advantage (and possibly impeded by his ‘mo’), blew the whistle seconds before the ball ended up in the back of the Pembroke goal. After some discussion, a short corner was awarded, Mul acting as the rampart, not for the first time, and (de-)nailing her first runner duties!

Glens threw everything forward in the closing stages of the game, winning several corners, but could not break the dam, leaving plenty of space for Sorcha Conway and Sharon Carey to counter-attack into. Both narrowly missed out on finishing a few choice passing moves (largely due to some respective Bambi-on-Ice and pirouetting antics).

All-in-all a fantastic team effort for a (slow) climatic first win of the season! Let’s hope it’s a spring-board for a leap into the 3rd round of the Irish Senior Cup this weekend!!