Scotty Furlong’s late drag flick sealed all three points at Serpentine Avenue on Saturday, keeping them in the hunt for the Division 1 title. The move which was started from a fantastic tackle from 44’s very own Karl Lynch, a player not renowned for his defensive abilities but more his good looks, Kirk Shimmins was on hand from Lynch’s pass to secure the corner which Furlong duly dispatched. Amongst the team’s celebrations Lynchie could be seen blowing a kiss towards the balcony where his girlfriend, Hannah, watched the game infatuated by Keith “Silky” Crawfords skills. Rovers were initially awarded a stroke inside the first 10 minutes after O’Connor’s shot was blocked over shoulder height by Furlong on the line, but it was correctly reversed. 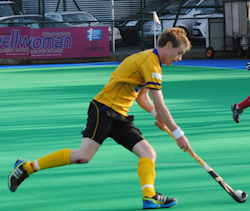 Karl Lynch - should probably stick to the hockey

Kirk Shimmins was then denied by West, some say it was the new stick he was using, so its probably a good thing that it was stolen after the match. Rovers who had a few efforts themselves were denied by Williamson, who had a good game. Pembroke – without suspended Pizza boy aka Maurice Elliott and Ben Grogan who was celebrating his 21st birthday. Rovers will feel annoyed not to have taken advantage of their one man advantage in the second half when Adam Pritchard was given a yellow for a stick tackle. All in all it was a good day for Pembroke, the ginger legend taking over the reign of captaincy for the injured Ronan Flannery.

Pembroke who don’t play again till the 19th will hope to stay on “TRACK” when they play Railway Union in Park Avenue.
A Karl Lynch Production – please direct complaints to him.

And in other news…
The Ladies 1sts were beaten 3-0 by title contenders Loreto who were able to pick some of their international stars ahead of Ireland’s Olympic Qualifier next week. Emma Sweeney came in at the back while Rebecca Sweetnam was also back for the girls. Anna O’Neill’s girls will be hoping to pick up points in their last few games to finish out the season on a positive note.

No change at the top of Div 3 for the Mens 2nds who beat Three Rock 3-1 at home. David Kane, Gordon Elliott and Dave Molloy scoring. Glenanne also picked up full points against Railway so its very much all to play for with both sides locked on equal points and only 3 games left to decide matters. Pembroke have a slightly superior goal difference and it will be interesting to see if the title comes down to this.

Elsewhere on the Mens side the 3rds suffered a set back in their title ambition, losing 4-3 at home to Monkstown. The 4th XI were dealt a blow to their division 5 survival hopes, going down 2-1 away to North Kildare. However, the result of the day went to the 6th XI who won 13-3 away from home against YMCA. The goals came from Neel Bhandari (1), Matthew McDonnell (3), Ian Styles (2), Milo Arkins (4) and Mick Payne (3). The result keeps their title hopes alive and helped the 7th XI in their own push for mid-table respectability. 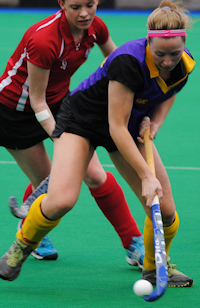 The Ladies 2nds had Lorraine Horgan to thank for a 1st half goal which gave Eimear McCarthy’s side full points against UCD 2nds. College needing points badly in their fight near the foot of the table called in Pembroke ‘old girl’ Noelle Farrell to bolster midfield, however they were unable to breach the Pembroke defence in an entertaining game. With Loreto 2nds overcoming Hermes 1-0 to maintain their 3 point cushion and only 2 games to go, the Division 2 title is very much the Rathfarnham girls to lose.

The Ladies 3rds lost out away to Div 3 strugglers Naas while the Ladies 4ths could only draw with Malahide meaning their next game against Newbridge is a must win. The Ladies 5ths picked up a hard earned point drawing away to Guinness and will also need points from their last two games while the 6ths remain up against it after a draw away to Our Ladies.

Better result for the Ladies 7ths who won 5-0 while the 8ths narrowly lost out to Botanic 2-1 out in Glasnevin.