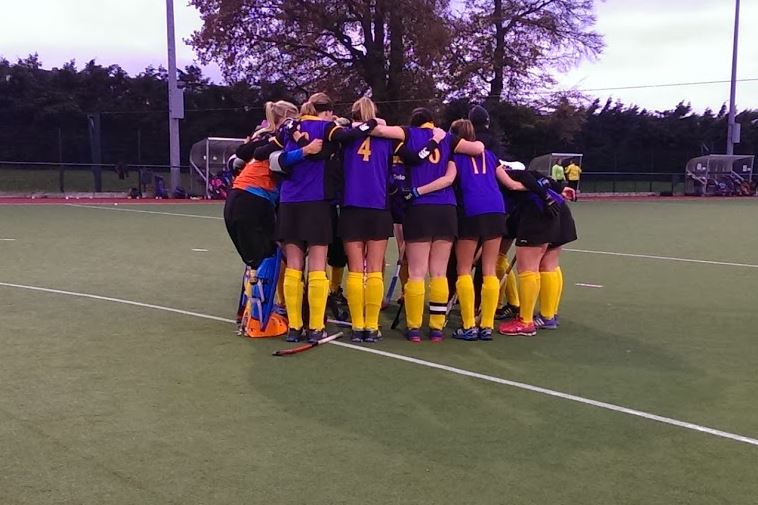 With four Pembroke teams in the running to win their respective leagues, the Ladies 2nds crossed the line first following a win in Grange Road v TRR on Wednesday night.

With 8 new faces joining the squad, and the new look coaching line up of Ronan Flannery and Paddy Good, no one knew what the 2013 / 2014 season held in store for the 2nds. A short, but gruelling pre-season set the tone for how the year would go, and the “FITNESS FIRST” mantra from the two boys has not waned once since early August (much to the dismay of some of the older heads on the team!).

Squats, burpees and shuttle sprints have been the favoured drills in the torture physical sessions and there is no denying they have paid off, with the team out-running and out-gunning most oppositions they have faced this year. Add to that the best defensive and attacking record in the league, conceding just 9 goals and scoring 39 in 16 games, and the 2nds were definitely a formidable opposition.

Early wins of 2-0 in the opening 4 games got the 2nds off to a great start, and they continued to build on that performance with a 6 goal haul v Hermes before a big result away against old rivals Loreto. That 2-1 win was the first time in at least four years that Pembroke had taken all 3 points away from Beaufort and marked a major turning point in the season. The next two games saw Pembroke beat UCD and Muckross placed second and fourth respectively in the league to head into Christmas with a 100% league record.

The winning momentum continued after the break, with 4 goal wins over Alex and Trinity and a 3-1 win away to Genesis, another team that have in previous seasons frustrated the 2s. 12 games unbeaten, and the 2nds just needed 2 more wins to secure the league. However, Hermes had other plans, and battled back impressively from 2-nil down to draw the early morning game in Serpentine Avenue.

Loreto visited next, and got revenge for the first round, beating the 2nds by a solitary goal, the dismal weather conditions matching the mood in camp pretty accurately after the game! Needing 4 points from 4 games the 2nds next travelled to Railway, where the dip in form continued and Railway held out for a 1all draw. This was taking forever!!

The team travelled to Grange Road with intent on Wednesday night, knowing a win would take the league beyond nearest rivals Loreto. With TRR needing the win to escape the relegation zone this was always going to be a tough match, but after years of finishing runner-up the league title was coming back to Pembroke that night. Shona Doyle netted two, while Anna O’Neill, top-scorer for the 2nds this season popped one away as well to continue her excellent run.

All over the pitch the 2nds were working hard and a massive team effort finally sealed the deal with two league games to go. Massive thanks to the supporters who have been with us all season, with special mention to Robbie Meaney, Bernie Barry and the McDonnells who have hardly missed a minute since October!

Paddy Good spoke to The Hook after Wednesday’s win –

“The foundations were laid last year by Mick O’Connor so I’d like to give him credit for that; they’ve been close to it now for a number of years,

…For Ronan and I it was a case of not changing too much and just giving the girls the confidence to go out and play. They are a really committed, hard working, positive group who want to play at a high intensity. As a coach, you want to facilitate that and not get in the way too much.

…I think we went on a super run that built and built pre Christmas. That in itself brings its own pressures and challenges as people were saying that we had the league wrapped up for weeks and suddenly the wins dried up a bit and the last few points proved a little elusive. Thankfully we got them last night and I think the girls thoroughly deserve it for their efforts.”

IJC semi-finals beckon, but for now the 2nds, with the amazing team of Paddy and Ronan and manager Sue Ryan are revelling in being Leinster League Champs 2013/14!