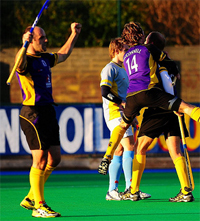 Friday night saw Pembroke 6ths host Wicklow under lights at Serpentine Avenue in what was the 6ths last league game of the season. The 6ths came into the game looking to consolidate a mid table position.

Having lost many of last year’s excellent squad to higher teams, following retirements and injuries, the 6s were forced to regroup in October, after the withdrawal of our 7ths and although a league challenge never looked likely, Keith Sutherland did a fine job of steadying the ship. Wicklow, on the other hand came into the match as firm favourites, recently confirmed as division 8 champions, having won all fifteen of their league games so far, scoring fifty three goals and conceding only six, along the way.

The match began at a frantic pace, with both sides getting plenty of position. The unfamiliar looking Pembroke back four of Justin van der Spuy, West Thornton, Wouter Desmit and Keith Sutherland were called into action, right from the off; with Wicklow making better use of their possession to produce some early chances, from which they will feel they should have done better.

As the half wore on, the Pembroke midfield got a foothold in the game and youngster Sean Fenlon, a graduate of our u16s, was able to get on the ball and show that he’s one for the future with some mazy runs down the left and some tenacious tackling that left Wicklow in no doubt that it’s definitely the size of the fight in the man that matters!

Wicklow, however, continued to show why they were in such rich scoring form this year, as they produced a number of shots from play that keeper Rob Morgan was forced to deal with. Wicklow’s pressure eventually yielded a couple of short corners midway through the half, although they will rue the absence of former PWHC favourite Stephen Stewart, as the short corner team seemed to have left their shooting sticks at home and spurned a number of gilt edged opportunities.

Pembroke’s response was as beautiful, as it was ruthless. Fine work in midfield saw Wicklow cough up a shorty and Pembroke made no mistake, Neel Bhandari sliding in at the far post to deflect the initial shot past a stranded Wicklow defence. The half finished with a flurry of activity in Pembroke’s circle, but Wicklow couldn’t find a way through and the teams went in for half time with the hosts leading by a goal to nil.

The second half began amid ever heavier rain and Pembroke appeared sluggish after the break. The loss of Andrew Stokes and Neil Farrell to injury just after half time, left Pembroke short of options off the bench and Dan Thornton and Sayed Shah had to work extra hard from midfield. Unfortunately, Wicklow eventually made up for their earlier profligacy. Having seen an earlier effort from play come back off the post, Wicklow piled forward on a counter attack and eventually danced their way to the bye line and pulled it back for a tap in to level the score. The Pembroke defence will feel they should have done better though, as keeper Morgan appeared to fluff his calls, which allowed Wicklow the vital space and time, to cross and finish.

Tempers flared on several occasions in the second half. The first came when Wicklow were generously awarded a short corner when Rob Morgan was adjudged to have taken out the centre forward, when it looked to all that the Wicklow player had been illegally shielding the ball and was backing in. This incident was quickly followed by West Thornton needing attention for a challenge that would even have been deemed dangerous in ice hockey. Thankfully, he returned to the fold after a small break, to resume his duties at the back.

Both umpires were soon called into action again as the match threatened to descend into a brawl, when Neel Bhandari saw yellow for appearing to retaliate for some persistent fouling by the Wicklow defence. Umpire Mossie Elliott did a fine job of controlling the situation and the match resumed with seven minutes left.

Although both sides enjoyed time on the ball, Wicklow always appeared the more likely to score, as their one man advantage began to tell. They were, however, unable to convert any of their chances and with the last play of normal time, Pembroke won a short corner; just before the whistle blew for full time. Once again, Pembroke showed Wicklow how it should be done, as Stefan Ritzen bundled home after the initial shot fell kindly to him. Wicklow’s protests that the ball had gone in off the back of Stefan’s stick, were checked by both umpires, with the goal eventually being given. A final score of 2 – 1 saw Pembroke become the only team to beat Wicklow and take any league points off them this season.

Some unsavoury scenes after the whistle left a sour taste in the mouth, but these were soon forgotten as Pembroke toasted a hard fought win, over an outstanding Wicklow side that were deserving division 8 winners.