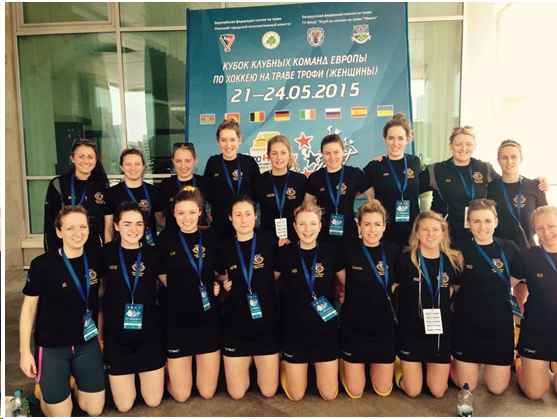 On the 19th of May, the Pembroke ladies firsts assembled at Dublin airport to embark on a trip to Minsk to compete in the Euro Hockey Club Champions Trophy. After a three-hour flight to Lithuania, a four-hour bus journey and a nervous border crossing, we arrived at Hotel “Belarus” and went straight to bed for an early start in the morning.

The next day we went to Minsk Hockey Club to get a feel for the pitch and the weather! (“Some of us are really freaking hot” – Jessie Elliot.) West (‘Kayne’) organised a lovely meal in a near by restaurant followed by a video session at the hotel before bed. Our first match was against Royal Wellington THC. We had a good start (“17 passes” – Keith Crawford) but Wellington were quick on the counter attack and took their chances. The end score was a three nil loss but it was a good first taste of the standard European Hockey. Orla, our physio for the trip, took us for an aqua aerobic warm down in the hotel pool after every match so we would be ready for the next day.

Our next match was against Atasport from Azerbaijan. They were a physical side as they received five cards through out the game. Pembroke led the game with a goal in the first half (“pretty sure I touched it” – Sorcha Clarke), but Atasport were quick to respond with the half time score being one all. Alice Ward scored in the second half with the game finishing two all.

Sumchanka were last team we had to face in our group and we needed a win to avoid relegation. It was nil all in the last five minutes so we took our goalie off to push for the win but we were unlucky as Sumchanka got an quick break and scored in the 69th minute. We woke at 6am the next day to play our final match in Minsk HC against Metrostroy at 8.30am. The atmosphere was “electric” at the stadium with the crowd making lots of noise (“защита! Атака!” – Russian Men). After experiencing a great standard of European Hockey (“I’m just here to play hockey” – Laura Hanlon) we went to hotel bar for a well earned drink or two…

We’d like to thank Keith, Tim (Kim), Michael, West (Kayne) and Orla for all their hard work in preparation for the tournament and during the week itself. Thanks to everyone who helped us get there, it was a great experience that we will never forget.