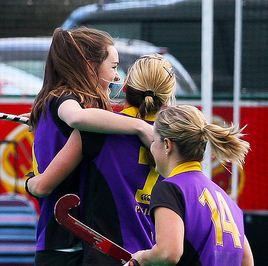 The Ladies firsts faced a tough challenge against an Alex team that had a 100% record in their opening 3 games of the season. Alex started the stronger and scored a drag flick goal from an early short corner. They followed that up with a second, again from a corner and scored a third from play within the opening 20 minutes of the game.

However, Pembroke continued to battle and were rewarded with goal from play, Sorcha Clarke setting up Sophie Marshall after a scramble in front of goals. The second half saw Pembroke get more involved in the game, but the Alex defence held up well and the game finished 1 – 3 to Alex. 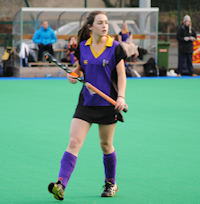 Pembroke Ladies 2nds’s continued their strong start to the season with a comprehensive 3-0 win over Old Alex on Saturday. Mick O’Connor was joined on the sidelines by ‘guest coach’ Ronan Flannery, and between them the dynamic duo oversaw a controlled effort from Pembroke.  Susan Ryan hit the backboard twice, scoring from both from play and from a corner.

Rachel O’Brien created a goal from nothing, picking the ball up around the 25m line and dancing her way into the circle beyond the Alex defence. With her back to goal at the top of the circle she spun and fired the ball into the goal beyond the keepers reach. The defensive line was never under serious pressure, conceding just a couple of corners in the whole game, though Anna O’Connell in goals was called on to make a superb save in the closing minutes, and the game finished 3-0 to Pembroke.

Pembroke 3rds had a difficult outing against a very strong newly promoted YM team. YM took the first half 2–0, with Pembroke struggling to get to grips with the speed of this young team. The second half saw Pembroke take more control of the game, and the forwards began to reap some rewards from their efforts winning a number of corners in succession. Unfortunately they could not find a way past the YM defence and the game finished 0–2 to YM who must be fancied at this early stage to gain promotion to Division 2.

Mossie’s Ladies 4ths continued their excellent start to the season, taking full points and continuing their 100% record in the early game in Serpentine against Tullamore. Alison Pigot got on the score sheet twice, scoring a stroke and one from play. Elaine Thompson netted the third with an impressive drag flick effort – possibly the first one Div 6 has seen!?

The Ladies 5ths kept up their 100% record with another impressive win, this time 3-2 out in Lucan against Weston. Captain Lydia Coleman netted twice, with Rebecca James popping up with the third. Elsewhere the 6ths played Muckross away with a larger than usual squad and it was 0-0 at half time despite Roisin’s girls dominating the game. After half time, Muckross quickly scored two goals which was followed by a Pembroke o.g.
Ash Schutte, fresh from a break following her summer international Master’s exploits got one back from a short corner but unfortunately it wasn’t to be and the game ended 3-1 to Muckross.

..awaiting news from the 7ths and 8ths! Please email web@pembrokewanderers.ie