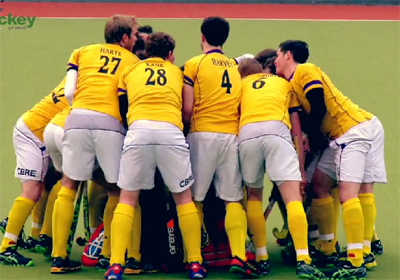 A tough defeat for Pembroke men’s 1st XI in the Irish Senior Cup Final saw Three Rock Rovers end their 40-year wait for the trophy. It was a game that had plenty of ebb and flow as Three Rock created numerous chances early on that had the bench looking on nervously. However, some good defending by Harry Spain and Conor Harte helped deal with the dangerous threats of Johnny Bruton and Mitch Darling.

Coach David Passmore got his tactics spot on with a compact press which limited Three Rocks midfield space. As the half wore on momentum was slowed with some needless green cards which saw us down to nine men for the closing minutes of the first half. We went in at the break 0-0 but feeling confident that the game was there for us to win.

The second half started brightly with Karl Lynch winning a corner after he slalomed by some would be tacklers to force the error. The resulting corner was broken down but the ball fell kindly to Conor Harte who unleashed an unstoppable reverse stick shot to give Pembroke the lead.

Rovers then began to exert some pressure and they found the equaliser after a crash ball was touched in by Mitch Darling. In the 52nd minute Rovers took the lead through their only short corner of the game, with Blakeney sending a slip flick past Ingram. With time ticking down a bursting run by Ronan Flannery drew the foul of a Rovers player which resulted in a short corner and Rovers being reduced to 10 men for the remainder of the game. The corner that ensued produced a good save by the Rovers keeper but the rebound fell to Sothern and his effort was somehow touched onto the cross bar and out for a long corner.

Momentum was with us as we pushed for an equaliser. Eventually we got the break through, an excellent long ball by Conor Harte deflected in to the goal by the diving Tim Hill to level the game up at 2-2. The final minutes were edgy as neither team wanted to lose and this resulted in the game finishing at 2-2 and heading for extra time.

So it was extra time for the second time in 24 hours as had been the case in the semi-final against Lisnagarvey the day before. It proved fruitless however, failing to produce an outright winner meaning it would be settled by penalty strokes. Sadly, Stephen West made the decisive save from Karl Lynch’s effort and Rovers won 5-4.

A heart breaking way to lose the final but the team are hugely buoyed by their performances and hope to push on and contend in the IHL. A big thank you must go to all the fans that came out and supported us over the weekend. It created a great atmosphere and the support was greatly appreciated.