On Thursday 9th August 2012, Pembroke Wanderers hosted a Leinster selection against the Australian Masters Over 50s in a warm up match. The Aussies were en route to the FIH Masters World Cup in Canterbury, England and needed a run out to clear the jet lag.

The Australian party numbered 26, including players, officials, wives and children, led by Coach Cameron Fairbrother and Manager Rod McNeill, and it was our pleasure to host such a fun and sociable group, particularly in the quieter off-season.

The second half continued in the same all-out vein but with less chances for Australia and more for the “whites” although the latter had Peter to thank for several excellent saves to keep the Aussies scoreless. An equalising goal eventually arrived for the “whites” and a carefully-aimed shot against the Australian post late on ensured the teams finished 2-2.

A very sociable meal in the clubhouse, prepared by The Wooden Spoon, followed and was much enjoyed by all, before the evening was rounded off with a few beers, generously funded by the Aussies. 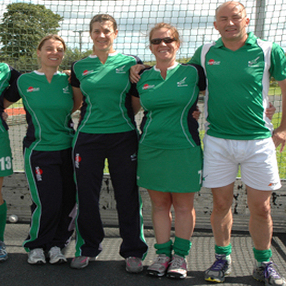 The Master’s World Cup takes place this week in Cantebury in the UK, Ireland have sent 3 mens (over 40’s, 45’s and 50’s) and 2 women’s (over 40’s and 50’s) teams. Pembroke are well represented – Peter Priestley, Annie Lawlor, Aisling Schutte, Sinead Guilfoyle, Bernie Barry and Alison Pigot all involved, best of luck to you all.