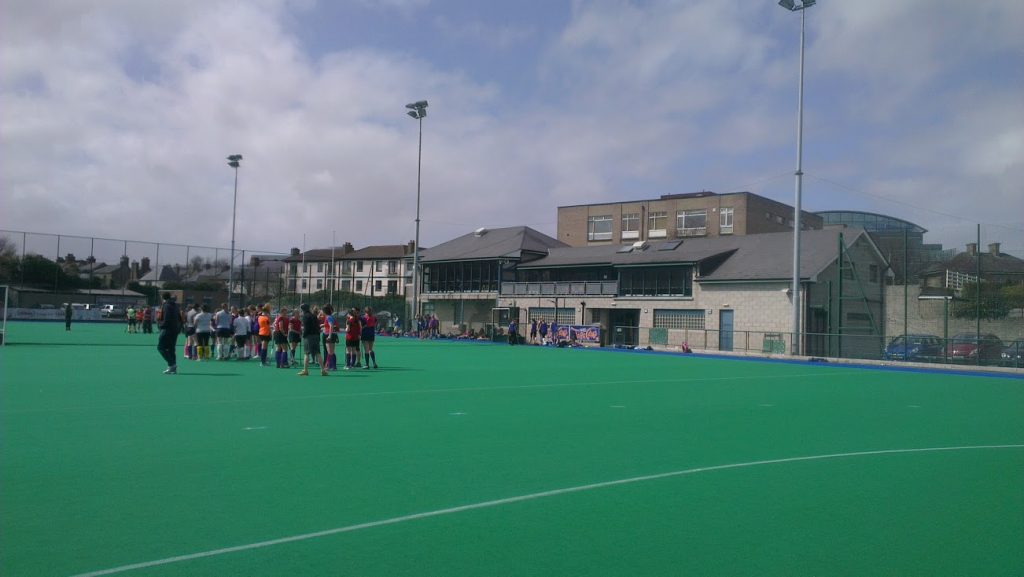 A beautiful day from start to finish matched the enthusiasm and energy being burned up on the pitch as young hockey players battled it out from 9.00am to 7.00pm vying for their respective cup. A good buzz generated by players, supporters and parents pervaded the atmosphere throughout for a most enjoyable season-opening day.

As always, the girls played in the morning, with teams from Loreto Dalkey, Mount Anville, Mount Sackville, St. Andrews and Wesley College participating. From 9.00am, a feast of hockey began, and ran through a blitz of half-length matches, finishing just before 2.00pm. High quality hockey abounded, with plenty of goalmouth action and goals arising from the high pressing, deep defending and lung-bursting running of the players. Ultimately Wesley College proved to be the outstanding team, winning all four matches, scoring 6 goals and conceding none, whilst St. Andrews and Loreto Dalkey finished second, albeit some way behind. Judging by the play on display, the future of girls hockey in Leinster looks bright indeed! Following completion of the last match, the cup was presented to Wesley College by our President, Bernie Barry.

Many thanks to Bernie for her lengthy attendance, and for her and the Ladies 1st team who umpired for the morning – Katie O’Byrne, Rachel O’Reilly, Sarah Clarke, Jilly Collins, Erika Hinkson, Alice Ward & Stella Davis.

The boys competition began at 2.00pm, with the participants being High School, St. Andrews, St. Kilians, Sandford Park and Wesley College. This was a tight affair with three schools still in the running with two games to go! Much superb hockey was on show – enough to impress even our Mens 1sts – and again there was considerable goalmouth action and goals aplenty, along with the expected high standard passing and dribbling skills, and manic levels of running. High School emerged as the winners, having garnered three wins and a draw from their four games, followed closely by Wesley and St. Kilians.

The cup was presented to High School by current international Mossie Elliott, who encouraged the boys to remain in hockey in the future. The Mens 1st squad returned from their first League match of the season in the latter stages to mingle with the players, hand out flyers and encourage players to join Pembroke and enjoy the sport of hockey long into the future!

Again, without umpires there would be no games, so many thanks to Brian Cleary, Marcus Blake, Neil Labuschange & Zack Waters for their time and umpiring skills. Also to our Junior Manager, Deirdre Waters, for the flyers and attendance.