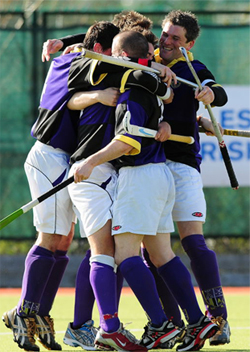 Pembroke, attacking the Railway End, had total control and possession in the first 10 minutes having three shots from play and three penalty corners. The ball was slow out on each corner but the first two yielded a shot and the second a rebound to Paddy Good. Unfortunately he could only push the ball wide. The last, a switch play, but missed by Dagg coming in from his own push in. Shortly after Peter Priestly was green carded for a late tackle and off for 2 mins.

Eventually, after 25 mins, Craig Wilson finished a sweeping move down the right for the first goal. In the last 5 mins of the half Pembroke surged forward twice on the right and once from the left and scored two fine goals by the Shekelton boys, Andrew and Glenn. On the stroke of half time Scott Furlong got the fourth goal for Pembroke in another fine move from halfway to finish the half, well on top.

The second half started with a goal apiece in the first 10 mins, Hill scoring for Mossley and, David Loughrey from a Sherriff assist brought their 5th. However, with Pembroke on top, the shape of their play became ragged and a further somewhat fortuitous goal from Andrew Shekelton gave Pembroke their 6th in the 52nd minute. Mossley, shortly after, had a long ball break and Todd to Todd, father and son, were on hand to score their second. In the 65th Justin Sherriff scored his first and Pembroke’s 7th, also from play, to complete the scoring.

The final score was 7-2 to Pembroke. The lads will travel north on March 2nd to meet Lisnagarvey in the Quarter Finals.