On a glorious late spring afternoon at Serpentine Avenue the top two teams in Pool A, after three round, were renewing a local rivalry which has seen the same teams finish first and second in the Leinster Senior League in 2009/10.

Cast in bright sunshine the deep green turf and surround of deep sky blue a good crowd saw Pembroke in their purple, amber and black kit defend the Railway End in the first half. Corinthian in red and white took the tip-off. 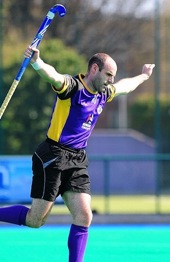 In the opening five minute the teams settled into the game with Pembroke retaining more of the ball. From a solo attack in the 6th minute into the circle Maurice Elliot was denied a shooting opportunity and from the resultant penalty corner Alan Sothern converted to make it 1-0 to the home team. Probably Ross Murray will feel he should have done better in covering the drag flick in the air and just to the left of the centre of the goal. Pembroke had more of the possession but with few scoring opportunities.

At the start of the second quarter Michael O’Connor had a fine run on the left but none of the onrushing forwards could get a touch which would have converted it into a goal. In the 25th minute a Pembroke mistake resulted in a Corinthian penalty corner but this was charged down by the runners and cleared. Corinthian’s were mostly absorbing pressure and counter attacking. In the 28th minute Darren Kimfley drove into the circle but his final pass was pushed wide. In the last minute of the half Pembroke’s second penalty corner followed from a quick attack and the flick by Conor Harte was pushed wide and the half ended 1-0 to Pembroke.

A series of uncharacteristic slack passes and poor ball retention early in the second half saw the initiative pass to Corinthians. The back four of Cronje, Fuller, Blennerhasset and Pelow moved the ball around but from a counterattack in the 42nd minute Conor Harte pushed forward through the right channel. He delivered a final pass just outside the circle to Gordon Elliott who dispatched it with great skill, on the reverse, for Pembroke’s second goal. His shot gave Murray no chance. Forced to try to use the ball better Corinthian’s had several chances and these were primarily down Pembroke’s right. In the 50th minute Carson hit the post and in the 52nd the final ball was again pushed wide with the goal undefended. Corinthian’s were working hard but not retaining enough of the ball in midfield or up front to force too many errors from Pembroke. The end of the 3rs Quarter saw the score 2-1 to Pembroke.

In the 55 minute a long ball was deflected by a Pembroke defender’s foot and a penalty corner, only Corinthian’s second, from Doherty was saved by David Harte. In the 63rd minute a clear chance from a long ball from the left was put over the bar by Chris Pelow. Time was running out for Corinthian’s. Pembroke were regularly breaking out of defence on their right and from Paddy Good pressurising the defence a move Craig Fulton and Andy McConnell saw the latter get the final touch to secure the victory and bonus point to assure Pembroke of Pool A leadership with one Match, at home to Monkstown, on 1st May to come.