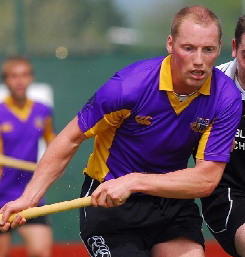 This top of the table fixture would be the crucial match in the destination of the league title in 2013/14 season. Pembroke have not participated in this League since the last century and in the first season since the restructure of Men’s Divisions 2 and 3 they led the way since mid-season. Below them have been Kilkenny whom they have beaten home and away and similarly Suttonians, Clontarf, Weston and Dublin University. Each are 1st League who are augmented by other Senior League 2nd YMCA.

Pembroke started brightly and two goals from play in the opening quarter, both by player coach, Justin Sherriff gave them a comfortable lead. However that was as good as it got territorially for the Home team. From that point onwards Avoca began to disrupt Pembroke’s attack and through a combination of good midfield play and poor defending, clearly missing Duncan McKeen, Avoca earned a succession shot from play as well as several corners none of which they were able to convert and the half ended 2-0 to Pembroke.

The second half again had Avoca attacking but very good ‘keeping by Hugh Lavery kept out all shots and corners until midway through the half. At this point he was eventually beaten from poor defending on the half way line and the ensuing attack led to a free on the edge of the circle and a shot which gave a first goal to Avoca. This spurred on Pembroke who in the last 10 minutes with Sherriff re-introduced got a third from Simon McKeever who was on hand at the far post to first stop the ball and coolly put it over the line from a few inches for the “insurance” goal. However within a minute Avoca got their second when Lavery saved well but there was no clearing defender and it was pushed over the line for a second goal for Avoca.

Several nerve wrecking minutes had to be endured by the home supporters before Ray O’Connor, reappearing as an umpire for this vital fixture, blew for full time and a 3-2 win for Pembroke and the League Crown. Other players who caught the eye were Scott Furlong, Ben Grogan, Craig Wilson and Paddy Good also had some good touches.

Maybe this will be the first of many Division 2 titles but any title has to be savoured and enjoyed. The win is certainly a boost ahead of the next round of the Irish Junior Cup away to Lisnagarvey in 2 weeks’ time. Here’s hoping we have another win and march on to the Final.