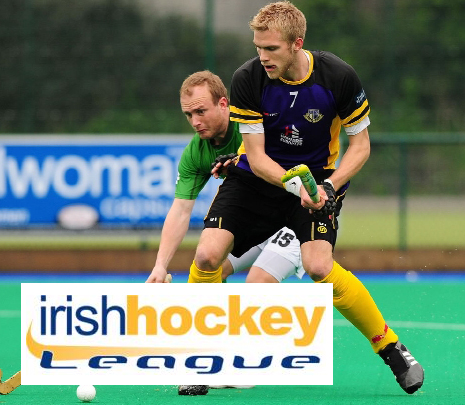 Pembroke Wanderers, ever presence in the IHL, welcome League newcomers UCC to a sunbathed Serpentine Avenue for the halfway league fixture in the 2014/15 season.
The Umpires today are Kris Cholewa and Noel McBride plus TO, Crozier Deane.

Two weeks ago it was an Irish Senior Cup match. The following week the Leinster Senior League and today IHL and each with slightly different rules. Confusing for players and Umpires alike, perhaps??

A win is important to Pembroke as they have yet to face Pool A table topper’s Annadale and IHL winners of last season, Monkstown. Conversely UCC hope to get their first points of the campaign.

Pembroke with the tip off attacked the Railway end and had the bulk of possession so it was slightly against the run of play when UCC earned a PC in the 7th minute but this was saved by an alert Pembroke defence. UCC also earned the first Green Card in the 8th minute by Adan O’Callaghan, not to be his only card in the game! Pembroke pressed and in the 10th minute had their first on many corners but it was saved. In the 12th O’Connor was pushed over in the act of shooting and from the resultant stroke Lynch converted low to the keeper’s Dan Moore right to put Pembroke onto the lead. UCC were awarded a PC in the 16th minute but the shot was high and the goal disallowed.

The 2nd quarter was mostly Pembroke in possession and after 23mins Matthias Podpera scored from Wanderers 3rd PC to put the home team two up. Pembroke’s only Green Card, to Maurice Elliott followed as did UCC’s 3rd PC but this was saved by Ingram.

Right at the start of the 3rd Quarter Ingram injured his ankle in saving from play but after a lengthy stoppage he continued. Straight from the sideline “back pass” O’Hare miscued a further pass across the goal and O’Leary was on hand to force the ball over the line for a welcome goal for UCC. The Quarter was very eventful with several PC’s to Pembroke and from their 7th in the 45th min Matthias Podbera notched his second and Pembroke’s 3rd goal. In the 51st minute Cillian Hynes got his first, a spectacular reverse shot and the home team’s fourth. |The quarter ended 4-1 to Pembroke.

In a flurry of more confrontational hockey at the start of the 4th Quarter, Adam O’Callaghan and Stuart O’Grady of UCC each earned a Yellow Card. However the 9 men of UCC stopped Pembroke from scoring whilst depleted in numbers. It was not until the last 10 mins that Pembroke scored their fifth, Tim Hill getting the last touch to a Karl Lynch shot and finally Cillian Hynes the sixth and his second in the 65th minute. Several further PC’s were also saved by Moore and a resilient defence. In fact the final act of the match was a PC to UCC in the 69th minute but as with the earlier ones this was also saved by Ingram.