Our guest contributor from the Men’s 1sts this week is Mr Tim Lewis!

Pembroke and Railway shared the points in what was a fitting end to a disappointing weekend in Irish sport. The drab bank holiday game shared none of the festival atmosphere and left most supporters wishing they had stayed home to nurse their hangovers (not mentioning any names Emma).

After a lackluster start to the game, it was Pembroke’s Scott Furlong who eventually took the game ‘by the scruff of the neck’. Enraged by the lack of effort around him, his ensuing assault of Mossy Elliott was slightly over the top, but it was this aggressive stance that began a period of Pembroke dominance. Good work down the left saw them earn their first penalty corner through Keith “Silky” Crawford. Furlong’s initial shot was well saved but Wilson was sharp to the rebound and his follow up effort found the defenders foot and a stroke rightly awarded. It was Furlong, still on a one man crusade to lift the team, that stepped up to take it, controversially prizing the ball from the hands of regular goal scorer and all round good guy Timmy Lewis. His effort was saved, but given how ruthlessly he had disposed of Mossy no one dared argue. Thankfully Pembroke did not have to wait long for their goal. Again it was Silky Crawford, showing no ill-effects of what was presumably another heavy weekend for him, that crept his way through the middle of the pitch to earn another corner. Furlong’s initial shot was blocked but the rebound couldn’t have fallen to a better man than Cork-born Pritchard (well maybe Lynchy would have been better) to smash it away bog-ball style. 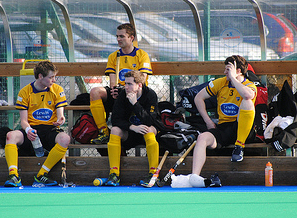 The lead didn’t last too long, Railway’s Jeremy Duncan dancing through a number of Pembroke defenders on the top of the circle to earn his side their first corner, which Peter English fired home low to the keeper’s right. From then the game turned in to a drab affair, only briefly brought to life when first, Mossy Elliott shrugged off concussion and 3 Railway defenders to fire in to the bottom corner from a tight angle, and second Duncan again slalomed through a number of Pembroke defenders, this time finishing the job himself and smashing past Williamson on his reverse to level the scores. Pembroke pressed hard towards the end and had a number of chance to win the game, most notably when Lewis’ stunning 3-yard strike was devastatingly ruled out because of an early whistle, but it wasn’t to be and it’s back to the drawing board for Pembroke and the corner team.

In the end a draw was the final and probably fairest result.

Elsewhere Glenanne drew with UCD while Monkstown picked up 3 points against Corthinians so its still all to play for at the top of Div 1.

Pictures from the Ladies 2nds recent win over Hermes in the league. They will meet again in the IJC semi final, home on Sunday April 15th.