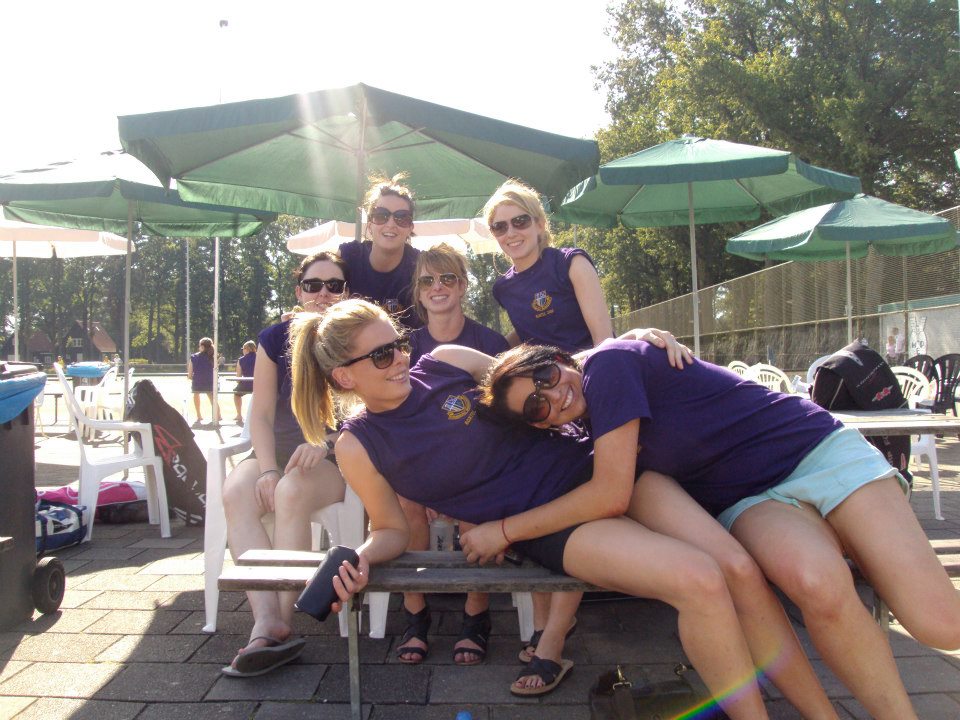 Pembroke Wanderers Ladies 1sts travelled to Eindhoven with the lads last weekend for some low-altitude, high tempo pre-season training. Match report from their games against the Hosts:

MEP Eindhoven 1 Pembroke Wanderers 2
Game number 2 was at 6pm. Any hope of a reprieve from the heat was long gone – if anything it felt hotter than the earlier game. The task was daunting, we were playing the hosts and they had beaten the team who had popped in 4 unanswered goals against us in the morning. But as we slithered onto the pitch, the Irish complexions sparkling like Edward Cullen in the sun, the home team shielded their eyes from the glare and you just felt a spark of hope among the travelling contingent.

Right away, Ailbhe took control of things from the defence and roared out orders at her team. Val powered up and down the right hand side relentlessly. Up front the forwards had found a new lease of life and sprinted onto every ball. Following a jittery start in the morning it looked like it was all coming together. The whistle went for the break, and Pembroke had the upper hand, but the joy was short lived when we realised that just 12.5 mins had passed and it was only a water break! The second quarter was more of the same, and Pembroke (mindful of Pillow’s earlier hellish threat of suicides in the blistering heat) soaked up the pressure in defence and poured into the MEP half. A circle penetration turned into a melee, the ball popped loose, and suddenly there was a flash of blazing red at the top of the D…which we realised was Noelle’s sunburned neck seconds before she buried a trademark reverse strike into the goal to take the lead. She went for a second shortly after through a corner but instead her power shot found Jane’s inner thigh to create the bruise of the tournament (though to be fair to Noelle, Jane was standing in the wrong place…).

After what seemed like an eternity half time finally arrived and the Pembroke girls scuttled their way into the shade. The half time talk from the boys was the perfect balance between motivation, inspiration and national pride:“SHOW THEM HOW WHY THE IRISH HAVE A REPUTATION FOR BEING TOUGH…but remember girls, have fun, enjoy yourselves”. “HIT THEM HARD…and have a good time out there”. “WE HAVE A CHANCE TO TAKE OUT THE HOSTS – THIS IS A MASSIVE OPPORTUITY, GO OUT THERE AND CRUSH THESE Bi*%HES…but girls, today we don’t care about results, all we ask is that you just do your best”

The team lined out for the second half. Lisa was breathing heavily and rasping loudly in goals – it was probably from the heat. Up front Sorcha appeared to be suffering from mild sunstroke and randomly asked the Dutch girls if they had found a phone / shoe and where was the nearest rollercoaster (she does love a good funfair). Emma was running around in circles muttering “okay, okay…” to herself. Jane, who had seemed immune to the heat, was struck by the “coach’s curse” – literally as the guys marvelled at her stamina she grabbed frantically at her heart, made vomiting motions and begged to come off. MEP took advantage of the wane and scored a goal after a succession of short corners. The 12.5min water break couldn’t come soon enough. Keith gave a few encouraging words again, Pillow let out a few supportive gasps but was still trying to catch his breath after his 35min run out a few hours earlier. It was one all with 12.5 minutes to go.
Up to now, Elaine had been her usual quiet unassuming self, but she must have acclimatised at some point during the game and started the final quarter at a blistering pace. Nothing and no one was getting past her. Her heroic efforts re-invigorated the team and suddenly we were in control again. Jilly burst through onto the ball around the half way line and the MEP players lined up between her and the goal. Standing upright at just 3ft 5” (or is that 5ft 3”??) MEP could have been forgiven for underestimating her, but Jilly left them in no doubt as she broke through 3 tackles and sprinted into a 1v1 with the keeper. As if in slow motion, everyone watched as Jilly took her on, and at the last second placed a weighted pass onto the right hand post. At the same time Sharon launched herself into the air, stick outstretched and tipped the ball into the goal for the winner!

The final whistle went shortly after that and the girls were thrilled to find that the mens team, always supportive, had left some lovely ICED surprises in the dugout to help the girls cool down after their efforts. Sound. A sweet victory against the very annoyed and battered hosts set up the evening’s celebrations nicely. Congrats to the double man-of the-match winners Jane and Elaine, and kudos to Val and Nadia who powered through two full games without taking a minutes break.