On a beautiful day under a clear blue sky the first of this season’s IHL matches got underway with Umpires, Geoff Conn and Kris Cholewa.  The two teams each showing significant changes, particularly the two times League champions Pembroke following the departure of 7 of last years winning squad and welcoming a new Coach, Brendon Carolan from South Africa. In addition they have several additions to their squad including Keith Crawford, Ronan Flannery and Karl Lynch from C.I. Harlequins welcome back David Eakins from London and also have a new Coach, Philip Oakley. There is rarely much between these two teams and that is how it turned out in the first half. 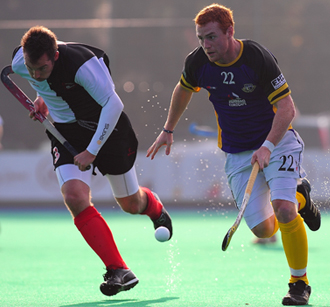 Pembroke pressed and had control of the ball for the better part of the half. Pembroke earned two penalty corners in the first quarter which here well saved by Chris Daunt the second being deflected off the crossbar and cleared. 0-0 at the end of the quarter although Quins picked up their pace strongly towards the end with John Hobbs and Jason Black defending resolutely.

Pembroke resumed their attacks with Karl Lynch, Gordon Elliott and Paddy Conlon to the fore and their pressure earned a green card for Paul Lombard for not retreating inside the 25. Whilst off the field a third penalty corned earned by Pembroke was converted by Jethro Eustace low to the ‘keeper’s left in the 24th minute. A further green card at the end of the half was awarded to David Lombard and the half time finished 1-0 to Pembroke.

The start of the second half saw a flurry of green cards for Keith Crawford and Maurice Elliott but Quins could not take advantage of the disparity of numbers. Pembroke were very dangerous from he left and deflected goals in the 49th and 50th minutes from Brandon Panther and Maurice Elliott saw Pembroke take a 3-0 lead. Jethro Eustace earned a yellow card in the 51st minute but in spite of this in the 52nd minute Karl Lynch initiated an attack from inside his own on the left and with an interchange of passes finished off by netting and the quarter ended a Quins penalty corner, their first which was well saved by Gowan Jones. The score at the end of the quarter was 4-0.

The action did not stop there and in the 55th and 60th minutes Quins had two more penalty corners and David Eakins netted the latter to close the gap. A lovely flowing series of passes between the Elliott brothers left Michael O’Connor to finish off from close-in to restore Pembroke’s four goal advantage.

In the last few minutes of the game as Pembroke pressed there were a couple of breakaways by Quins and in the 64th minute Philip McLoughlin pulled a further goal back for Quins. There were a few ruffled feathers in the by now congested areas in midfield and players became a little excited. However Pembroke were able to run down the clock and the final score was 5-2 to Pembroke.