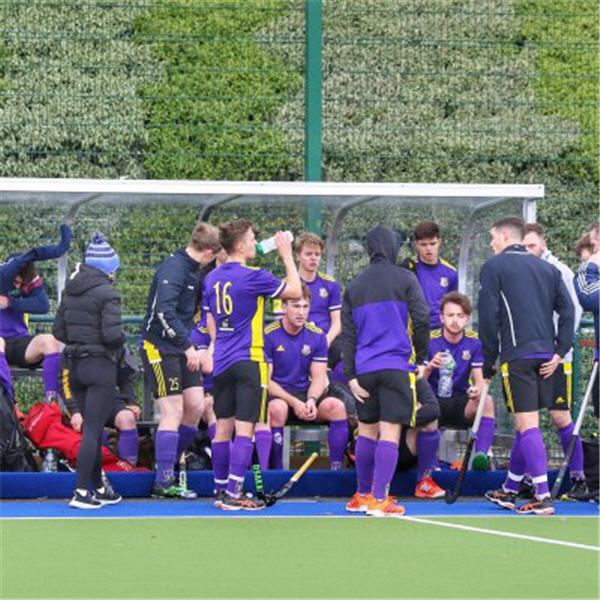 Sorry Saturday ends as 6s are only mens team to take a point over weekend.

M4s tipped off in the early game away to Trinity College 2XI and were finely balanced at 2-2 heading into the final quarter of a close game courtesy of a pair of goals from Gary Johnston. Calamity struck however and a further 3 unanswered Trinity goals put paid to any hopes of a point from the contest. Skipper Gavin Miller not pleased.

M3s had home court advantage in the 12:30 fixture as they endeavoured to follow the lead of the 2s earlier in the week by putting another Monkstown side to the sword. Not to be on this occasion despite goals from Glen Sheckleton and back-from-Japan Sam McElroy the 3s conceded a triple whammy to a canny ‘Town XI featuring sprightly veteran Ian Stuart.

M1s followed in the 1:30 EYHL fixture in Wesley College vs a YMCA side on the hunt for first points in the 2019/20 IHL campaign. The points duly went to the home side as goals from Nick Burns and Paddy Shanahan weren’t enough to forestall a 3-2 away loss that will sting Paudie Carley and captain Kirk Shimmins.

M5s also lost by an odd goal in their away fixture to Rathgar Chiefs at The High School. A lone penalty corner strike from Buzzy McDonnell not enough to rescue a point as Pete McEvoy’s squad find the results challenging in D5 this season.

M6s stemmed the flow of early-season losses and claimed their opening point of the season in a tense 4-4 draw with UCD 3s, featuring former Pembroke 4XI stalwart Andrew Blair White who contrived to stick 4(!) goals on his old club. Pembroke goals came from Neel Bhandari, Michael Payne, and a pair of debut goals from Pawan Prajapati. Good to see former Club Captain Derek Hennessey out for a maiden run of the season after complicated knee surgeries last year.